The weather has been great the last few days. Mostly sunny with highs in the 70s. I know our neighbors up north are experiencing some subzero temperatures. Sure glad we’re not there.

On Saturday we rode our bikes on the Mission Bike Trail. We went all the way to the end which is about 8 miles according to what I could find online. So I’m thinking that’s about a 16 mile round trip ride. It took us two hours. The trail is asphalt and reasonably flat. It runs along a canal and trees for most of the way. We saw several roadrunners along the way. They were being rather camera shy, but I did manage to get a picture of one of them. We’ve seen roadrunners in Arizona, but these were our first Texas sightings. 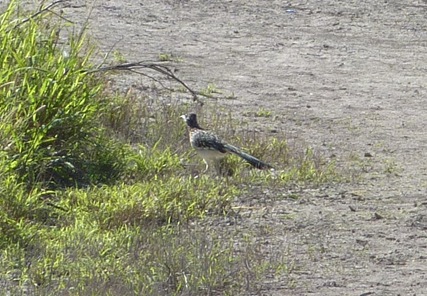 On Sunday we road our bikes about 3 miles to Bentsen-Rio Grande Valley State Park. This time we hopped on the tram and took a ride around the park. There was a park volunteer riding along who gave some information, but it was not a narrated tour.

We saw some of the same birds we had seen a few days earlier. In case I haven’t shown you enough bird pictures yet, here are a few more.

A wonderful shot of the Great Kiskadee. 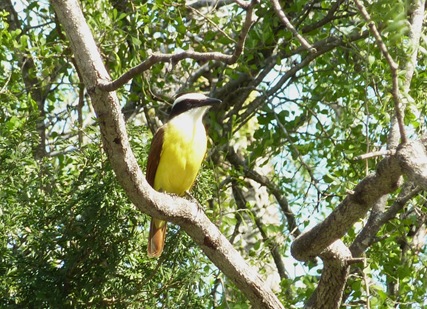 A pretty good shot of the Altamira Oriole. And one more Green Jay because they are so pretty. There is a pick up truck that parks a few blocks from our park loaded with bags of oranges and corn on the cob. We haven’t had corn on the cob in a long time, so we thought we’d give it a try. When I asked if it was sweet corn, the man told me it was white corn from Mexico, and it is very good. Okay, three ears for $1.50. It was the worst corn we’ve ever eaten, hard and pretty tasteless. We won’t be getting anymore. The guy also cut up an orange for me to try. It was much better. A 10 pound bag costs $4.00. I may be going back for a bag of oranges before we leave.

They were cooking ears of corn over a grill and selling it on a stick. Apparently, people down here like it. Not the sweet corn we’re used to in the Midwest, that’s for sure! Today we took a walk and are just kicking back, relaxing and enjoying the nice weather.

Posted by RV Khronicles of Kevelyn at 3:20 PM 7 comments: Links to this post