Yesterday we spent about six hours touring the two Johnson historical sites in this part of Texas. Lyndon and Lady Bird’s ranch as well as Lyndon’s boyhood home have historic sites and tours.

The ranch dubbed the Texas White House by the media of that time is the busier of the two sites. We started our touring there. The visitor center issues you a car pass and a self-guided CD audio tour for free. You drive around the ranch and learn all about the Johnsons while listening to the CD. It’s a great way to do a tour.

This is a reconstruction of the house in which Lyndon Johnson was born. He lived here for five years. 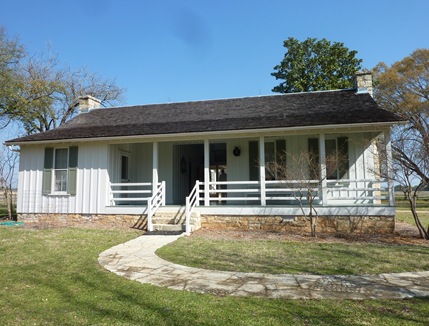 This is the Johnson family cemetery. Lady Bird and Lyndon are the two larger stones in the middle. This is probably one of the most unassuming presidential grave sites. A good trivia question would be what is Lady Bird’s real name. I never knew it was Claudia. 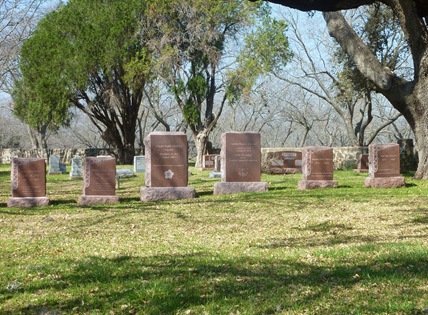 The Johnsons donated a large portion of the ranch to the National Park Service in 1973 with the understanding that there would be an educational component to the tours. For that reason, it is still a working ranch. In the Show Barn we saw some of the Hereford cattle that are descendants of the cattle Johnson owned. It was one of only a few ranches that branded the horns of the cattle. I’ve never seen that before. 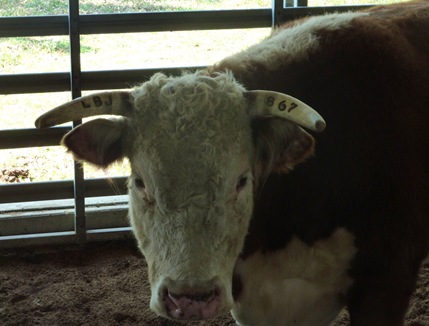 Near the ranch house is a hanger building with exhibits including several of Johnson’s cars. A larger Air Force One was used to fly to Austin, and then this smaller plane flew them from Austin to the ranch. Johnson jokingly called it Air Force One-Half. 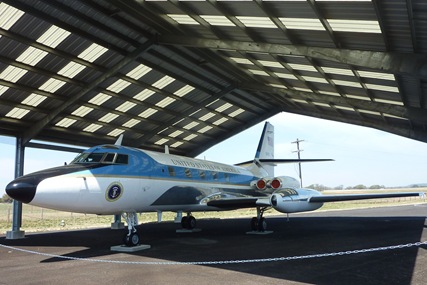 To tour the inside of the ranch house, you have to buy a ticket for $3 per adult. A ranger takes you through the lower level of the house and tells stories of when the Johnson’s lived here. It is decorated in the 1968 style while Lyndon was president. No indoor pictures were allowed. 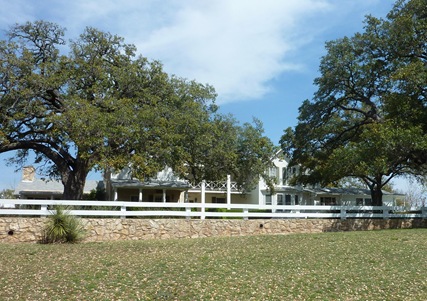 The Johnsons came to the Texas White House frequently throughout his five years in office. They spent about 1/4 of that time at the ranch. Johnson would even have cabinet members and other officials flown down for meetings, holding them under the Live Oak tree on the left. He loved entertaining heads of state and other important people at the ranch. I’m thinking that cost the taxpayers a great deal of money.

This certainly is a beautiful and serene place along the Pedernales River. I can see how it recharged his batteries. This is the view from the front of the ranch house. 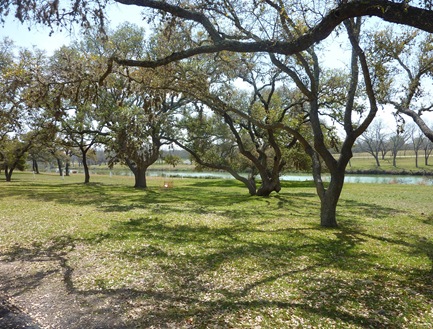 After the ranch tour, we drove about 14 miles east to Johnson City. When Lyndon was five years old, the family moved to this home where he lived until he was 15 years old. At that time he took off and went to California for a few years. Eventually, he came back to Texas and went to college where he earned a teaching degree. There is a free ranger guided tour of this house. 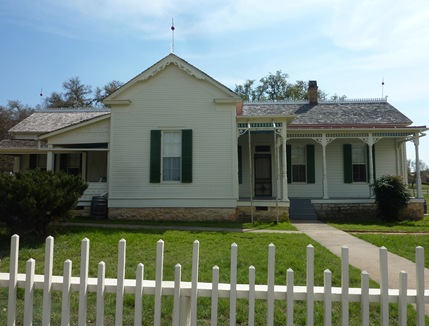 Our next stop was the visitor center in Johnson City. There are two movies available to view, one about Lyndon and one about Lady Bird. We watched the Lyndon movie and learned a lot about his presidency.

I was in first grade when Kennedy was shot. My only memory of Johnson as a president was the image of him being sworn into office with Jackie Kennedy at his side in her bloody pink suit. I really did not know very much about the man or his politics.

We learned that he was responsible for a revolutionary change in government funded public programs. He was interested in improving education, poverty, civil rights and the environment. I think his heart was in the right place, but unfortunately, many of the programs he initiated have become huge drains on public funds. I don’t know that what has happened was what he intended.

The ranger told us that normally the bluebonnets would be out in full force at this time. Due to the drought, there are very few to be seen. We did see a few patches of them along the highway. There was a flowerbed outside of the visitor center that was full of them. Too bad we’re not getting the full affect. They sure are pretty.

A short walk from the visitor center is the Johnson Settlement. This area has restored buildings from the mid 1800s when Lyndon’s grandfather first came to Texas as a cattle driver.  This was the home he built. 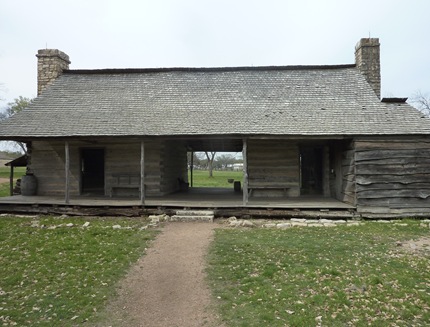 There were a few longhorn cattle in the pasture. 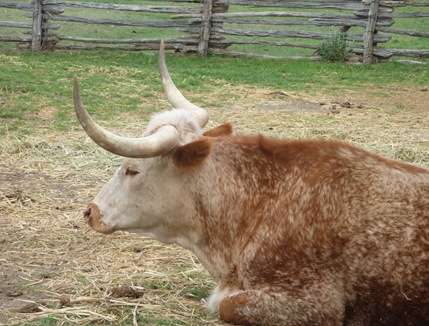 We enjoyed our visit to the Johnson historical sites. We learned a lot about that period in the history of our country and would highly recommend a visit.

Today we stayed home. We did take a walk around Blanco State Park where we will be until Friday. The park is on the Blanco River where there is a swimming area. We saw some people swimming at the top of the wall yesterday. The area on the right looks like a swimming pool. 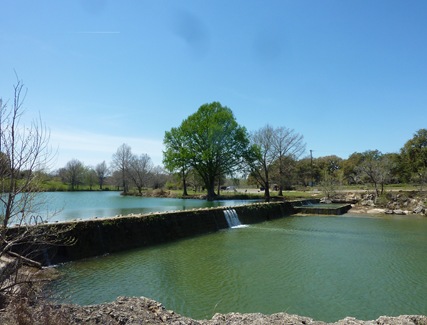 Here’s our site, #6 FHU 50 amp. The park has free wi-fi, but its quite slow and sketchy. The sites are large, but not all that deep for big rigs. There are also some trees to be careful around. There is a nice covered picnic table and a fire pit. 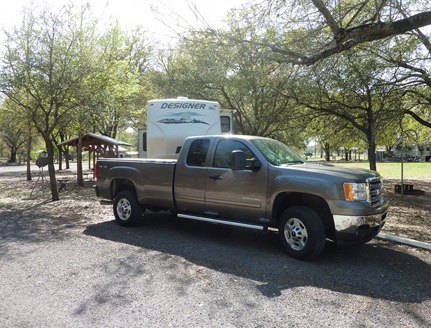 Posted by RV Khronicles of Kevelyn at 5:47 PM No comments: Links to this post