Kevin has been a fan of Nascar racing for many years. He has never attended a race because he didn’t know if he wanted to spend the money. I’ve been suggesting the last few times we’ve been in Phoenix that we should attend a race here.

This year everything fell into place. Our son Eric was going to be visiting during the race, and our friends Art and Dawn were also coming to Phoenix to attend the race and some baseball games. Eric’s race ticket was his birthday present this year.

Temperatures the last few days have been around 90 which is about 12 to 15 degrees above normal. I was quite worried about us sitting out in the sun for hours yesterday. We were very fortunate that there was a nice breeze most of the time. We made sure to have hats, lots of sunscreen and plenty of water.

We arrived at the parking lot at 8 am just as they opened the lots. We walked to the outskirts of the track where lots of semi trailers were set up for fans to purchase any type of race souvenirs you can imagine. Eric and Kevin purchased Matt Kenseth items. I found a half price shirt celebrating last year’s 50th anniversary of the Phoenix International Raceway.

There were over 100,000 people in attendance yesterday. Parking was free for cars and RVs. I couldn’t believe the sea of RVs. This race was sponsored by Camping World so there were even about 50 or more new and used RVs for sale. Many of them had SOLD signs. This picture is just a portion of the RVs dry camping in the desert parking lot. We saw lots of generators, but, I’m sure not everyone had them, so it must have been quite hot out there with these high temperatures. 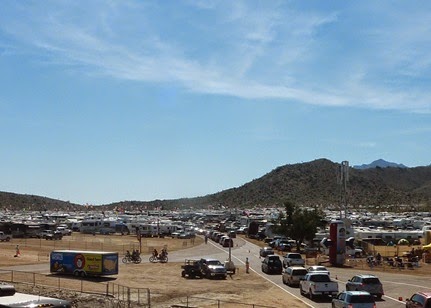 After checking out all the merchandise, we went back to the vehicles and did some tailgating. We had burgers and brats for lunch. Art and Dawn have been to many races, and know the tricks. By going to the merchandise area early, we avoided the massive crowds. The tailgating was a much better bargain than buying food inside.

After lunch we headed back to the track for the pre-race festivities. Our seats were in row 20 behind the start/finish line. Dawn said this is the closest she’s been to that part of the track at any race.

Thanks Art for taking our picture with Dawn. 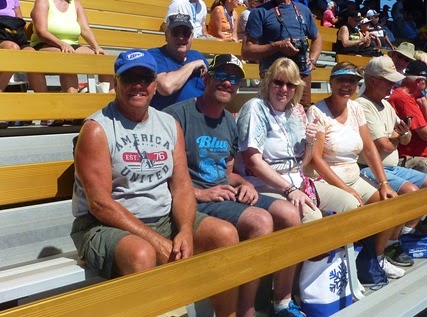 The drivers were introduced. Our favorites are Wisconsin natives Matt Kenseth and Paul Menard. 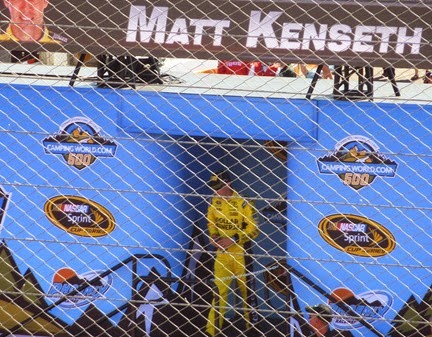 After the driver’s were introduced, they were driven around the track in the backs pick up trucks. Here’s Paul Menard ready for his ride. 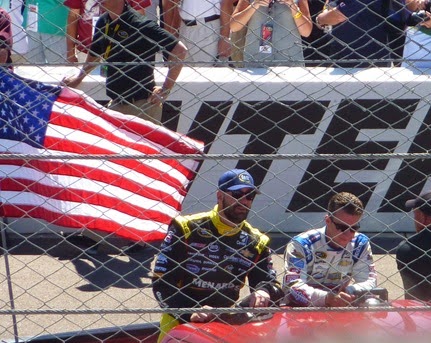 Budweiser is one of the sponsors of Nascar, and the famous Clydesdales made their way around the track. They gave lots of statistics about this beautiful team, but the one I remember is that just the harness costs $80,000. 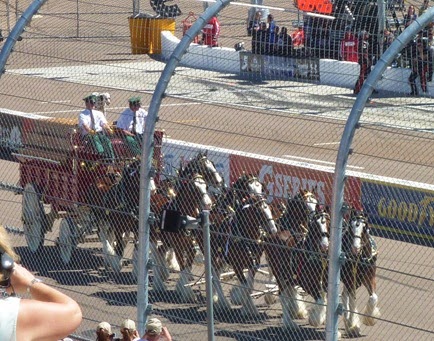 There were fireworks and some vintage planes from Luke Air Force base did a flyover. And, then it was time for the race to begin. Here’s the pace car and the green flag. 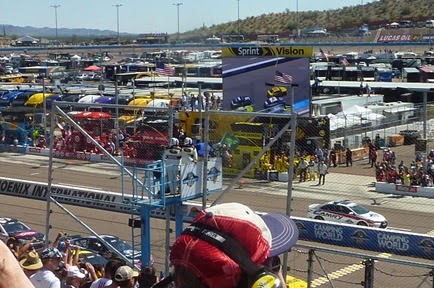 Art and Dawn had enough radios and headsets for all of us. I had been warned that it would be loud. When the cars first did a few practice laps, I didn’t think it was so bad, but then they hit the gas. It was incredibly loud!! I wore the headphones for the first half of the race. You can listen to the announcers or actually hear the drivers talking. After a while, the headphones began to hurt my head, so I switched to the earplugs I brought with me.

Kevin and Eric weren’t too happy that I wanted to take a picture while they were watching the race. 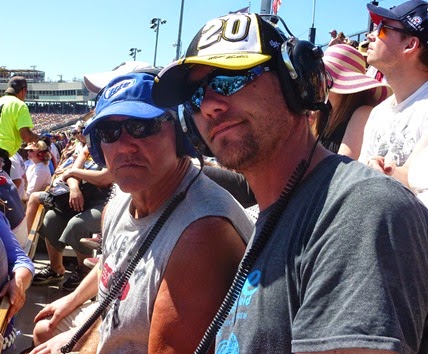 Pit row was right in front of us. It was very interesting to see just how quickly these guys get these cars in and out. Here’s Matt Kenseth pulling out after a pit stop. 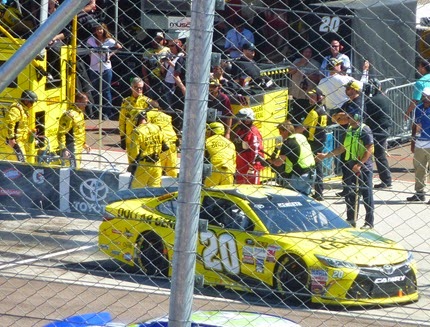 There were ten times that the race was under caution. Most of them were for cars that blew a tire and did a spin out. The rest were for debris on the track. No crashes at this race.

Kevin Harvick was the the pole leader at the start of the race, and he led many of the laps. He ended up winning. Here’s the checkered flag, although I didn’t actually get the car crossing the finish line. 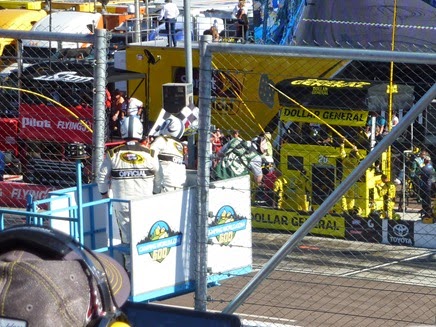 So, I have to say that it was an interesting experience. Kevin and Eric had a great time. I don’t know that I would go again, but you never know.

Phoenix International Raceway is a beautiful venue for a race track with the mountains in the background and the fantastic weather. 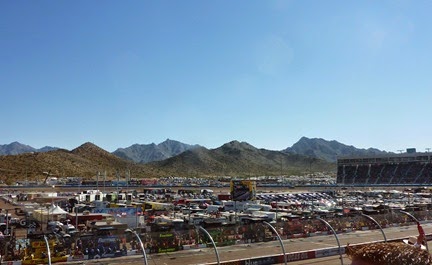 Tomorrow is Eric’s last day with us. We’re going to another Brewer game. His flight leaves at 7:45 pm. It was great having him here, although the time sure did fly by.