Last Saturday was Kevin's birthday, so we decided to go out for dinner. Fish River Grill #3 in Gulf Shores was our choice based on an ad I saw and reviews on Yelp. They claim to be the place where the locals eat and had some interesting menu items.

We had a coupon for a free fried green tomatoes appetizer, which we have never eaten before. It was pretty tasteless other than the breading. Their homemade crawfish sauce was very good on the tomatoes.

Kevin ordered a shrimp platter and I had the famous OMG Shrimp Po-boy which was chosen in the top 100 dishes to eat in Alabama before you die. Our meals started out with swamp soup. It actually looked quite swampy, but was delicious. It had collard greens, black beans, white beans and a pork base. We also tried fried okra which was also rather bland. Both of us enjoyed our meals, but we weren't blown away by any of it. The picture is of the fried green tomatoes and the swamp soup. 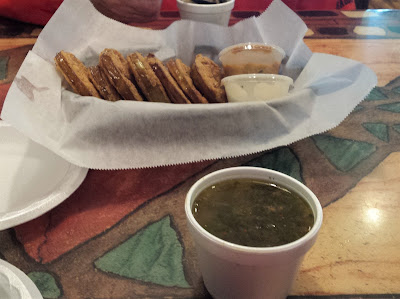 The week before we had lunch at Fiddlefish in Orange Beach. They have a winter special from 11 to 3 on Wednesday and Thursday of all you can eat shrimp and fish for $10 plus half price drinks all day. That meal was outstanding. The breading was light and very tasty. Both the shrimp and fish were delicious. The shrimp was available fried or sauteed in a garlic butter sauce. Both were very good. We would definitely go back. The restaurant was located in a shopping area with this beautiful fountain. 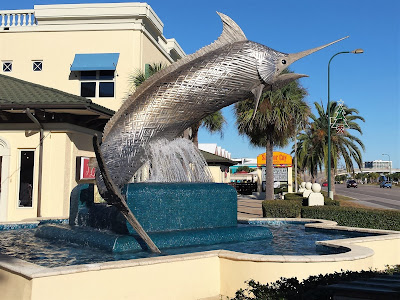 After dinner on Kevin's birthday we went to The Wharf in Orange Beach. It's an entertainment complex with shopping, bars, restaurants, condos and a marina. We walked around for a little while waiting for the boat parade to start. They had some beautiful Christmas decorations. 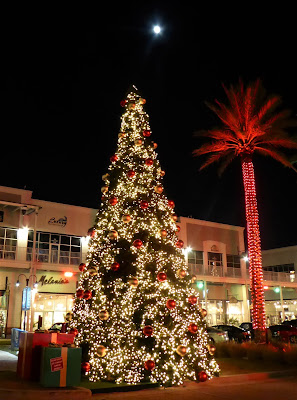 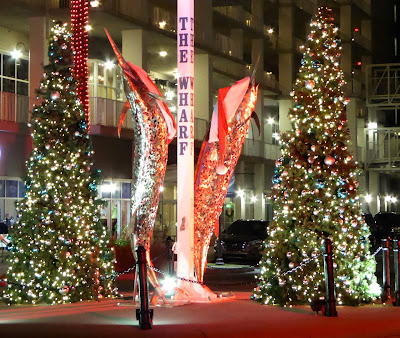 It was pretty chilly out, about 40 degrees. This area has a Christmas Lighted Boat Parade on the inter coastal canal from Gulf Shores to Orange Beach. There were lots of cars and people lined up all along the canal. We parked at The Wharf and watched from the public viewing area. There were over 30 boats in the parade, some lit much more than others. It was pretty cool. Certainly not something we would ever see in Wisconsin. It was hard to get good pictures of the moving boats, but here are a few of my better efforts.

This one has Snoopy on his dog house being pulled by a group of Woodstock reindeer. On the front was a large Charlie Brown Christmas tree. 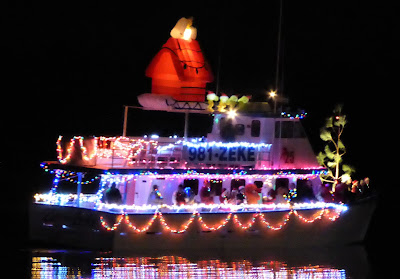 This one looked like a sleigh with reindeer at the front and presents on top. Very well done. 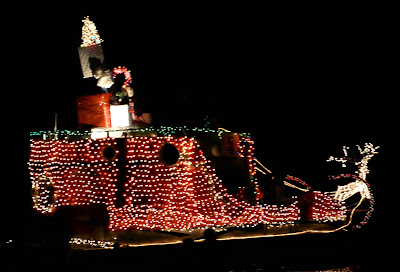 This was the last one and had two Santas and a bunch of other characters as well as singers. 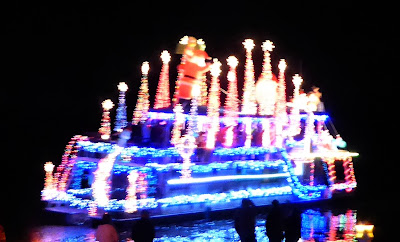 We had a bit of a cold snap last week with highs in the 50s and lows in the 30s for a few days. This week we're back up to the 70s. This afternoon we plan to golf again. We played last week, and I had one of my better rounds ever. I knew I was doing well, and let my nerves get the best of me on the last hole. Of well, it was still a terrific round.

Don’t wish upon a star – Reach for one!
Posted by RV Khronicles of Kevelyn at 7:40 AM 1 comment: