Our second port day was on Wednesday in Puerto Vallarta. Before departing on this cruise, we had been unsure whether we would do any excursions. After reading the descriptions of the whale watching tours, I was hooked and wanted to see some whales. I went to the excursion desk and asked which whale tour would be the most likely to fulfill my wish to see whales. The lady suggested the Whales, Dolphin & Snorkeling tour in Puerto Vallarta.

Getting off the ship was a confusing experience. Our tickets said we were to be on the pier at 9 am. They didn't open the doors until 9 and the line was very long. People like us with excursions were not given priority, and so we were in a long line with everyone else. We did eventually get off and walked up and down the pier looking for our tour. There was a wonderful mariachi band playing on the pier. 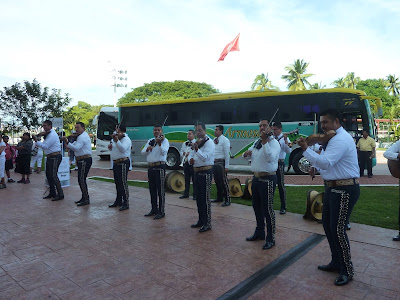 We couldn't find anyone with a sign for our tour, so ended up finding someone from our tour company. There was confusion as to which tour we were supposed to be on, and they put us on the wild dolphin and snorkeling tour. No mention of whales on the sign. Not a good start. We took a catamaran for an hour ride to the Marietas Islands, which are a national park of Mexico. Our first adventure was to swim a good distance to a hidden beach. We had to swim through a cave to get to the hidden beach. It was a very awesome location, but the description of the tour said we would sail to the beach, not swim there. In fact, quite a few people didn't go to the hidden beach because they didn't feel they were strong enough swimmers.

Next was snorkeling. Kevin had had enough of the salt water, so I went snorkeling without him. We had to get into a smaller boat (not easy) and jump off at the snorkeling area. The snorkeling area was up against the cliffs of the island, so I was a bit worried about getting pushed into the rocks by the waves. It was okay, but the water was somewhat murky. I saw lots of great fish, but I wish the water would have been clearer. I also saw a moray eel. That was cool!

Once back on the boat, we had a good lunch. They drove us slowly along the outskirts of the island to show us some of the 92 species of birds that live there. The person giving the information seemed quite knowledgeable. He gave the information in Spanish and English. I only understood about half of what he said in English. It was very interesting, but I wish I could have understood more.

Lots of birds make their nests at the top of the island among the spiky plants that are part of the pineapple family. The plants protect the nests. 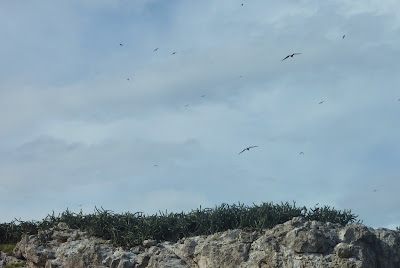 These were blue footed booby birds. I think he said they mate for life and are only found along the Pacific coast of South American countries. Their feet are the most amazing blue color. 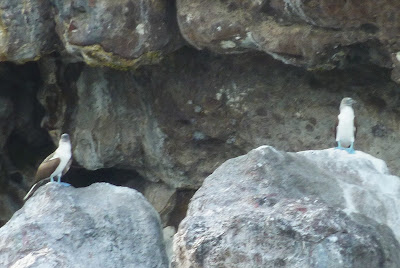 This is a grey heron that came out of the crevice to see us. 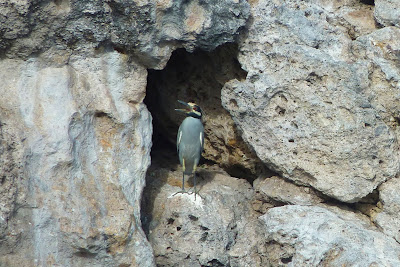 These are yellow footed boobies. 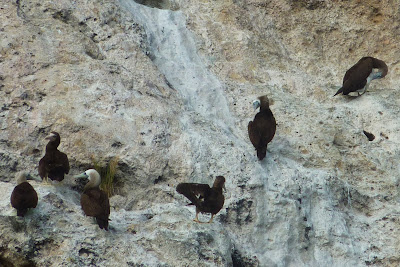 There was quite a large colony of them living on the sides of the cliffs. Click on any of the pictures to enlarge them, so you can see better. The colony of yellow footed boobies is right in the middle of the picture below. 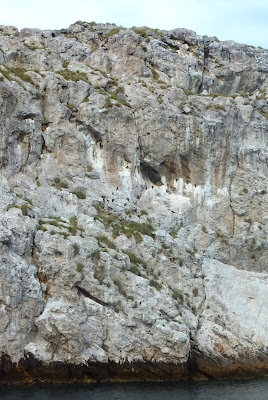 Here's a picture of the island as we were pulling away. 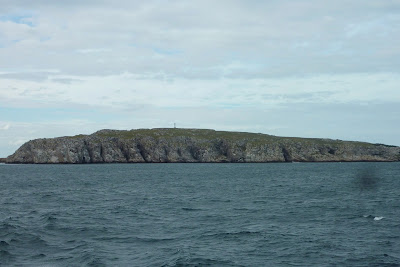 This brown footed booby flew along the side and the front of our boat for a long time. It was fun watching him soar around. 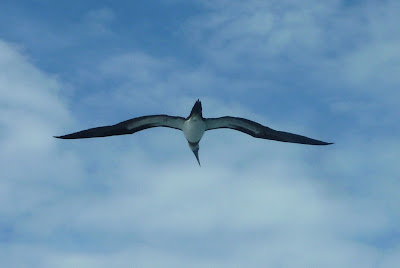 The hour long trip back to the port was quite uneventful. We saw three dolphins for about 10 seconds. Much of the time back, the crew did a song and dance number to entertain us. As they were busy with that, I don't think they were looking for whales. Of course, we didn't see a single whale, let alone the dancing and singing whales advertised in the excursion brochure. One of the crew members told me that they usually start seeing the whales in November, but this year they had seen very few so far. So, although there were some fun parts of the excursion, it was quite a disappointment as it was not at all as advertised. This is the second time we've been misled by an excursion description through Carnival.

Here's a view of Puerto Vallarta on our way back. As you can see it was quite overcast, but at least it was warm. 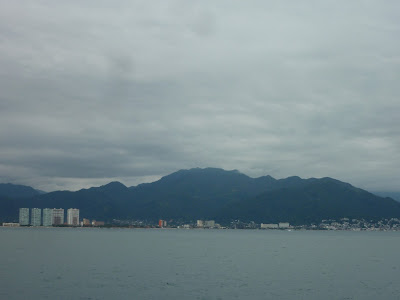 Here's the view of the Puerto Vallarta dock area from the top deck of the ship. That is a Walmart on the left with very nice blue covered parking, next on the right is a Sam's Club, and the large building on the far right is a casino. Quite the touristy place. Some of the crew members did mention that they like the stop here because they can walk off the ship to Walmart and stock up on personal supplies. 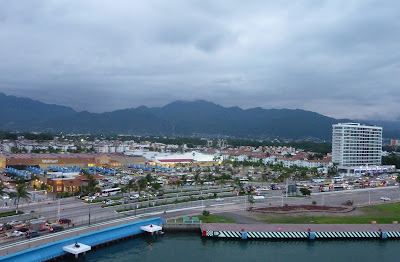 Thursday and Friday were sea days. It was very windy both days and also cloudy part of each day. The top decks were closed a good part of the time due to the wind. We hung out at a table on the Lido deck which is partially covered and has large windows that you can close. I had a jacket on the whole time, and it was okay. Certainly not warm, but tolerable. We played cribbage, enjoyed the music and read our books.

The last day they had a chocolate extravaganza at the buffet. On the top counters they had several carved watermelons. Pretty amazing. 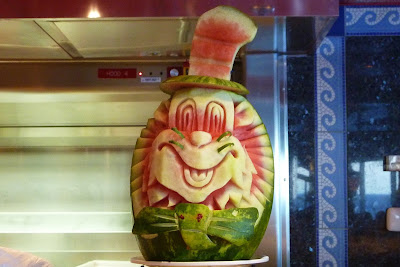 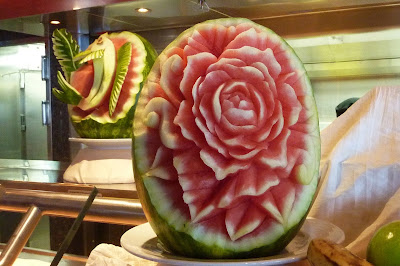 On Friday I attended the towel folding presentation. Do you like my creation? 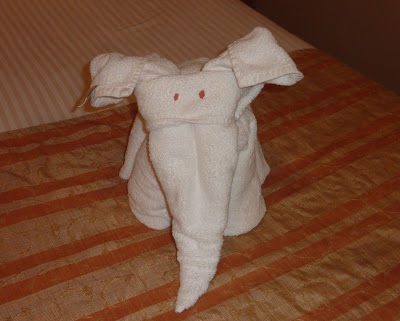 We had a beautiful sunset on Friday. Not many of those on this trip. 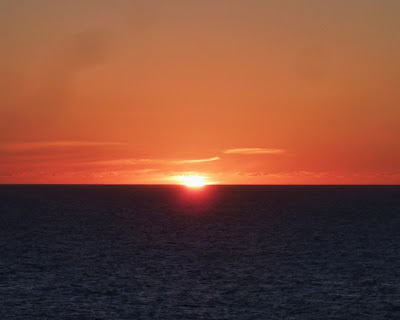 We got off the ship on Saturday morning. They had a new to us procedure this time where you could select a self-assist departure. This meant you took your own bags off the ship, and you got to debark before the people who had their bags taken off the ship for them. We chose the self-assist option and were supposed to be off between 9:30 and 9:45 am. If we had them take our bags off, the time would have been 11:15 am. We ended up getting off an hour later than scheduled, but at least it was earlier by taking our own bags.

Our truck was right where we left it at the hotel with no scratches or dings. That was a relief. We drove back to Yuma on Saturday via a route that took up past the Salton Sea. I had heard and read about this interesting place and wanted to see it. I'll write another blog about that little adventure in a few days.

Don’t wish upon a star – Reach for one!
Posted by RV Khronicles of Kevelyn at 12:26 PM No comments: