Another Tire Bites the Dust

You may recall that last February one of our Goodyear tires on the camper lost its tread and caused some considerable damage. Since then Kevin has been keeping a very close eye on the other three tires.

Today as we were stopped for gas, he noticed that the tread was separating from one of the tires on the opposite side as last year. He put on the spare tire, and we were on our way again. 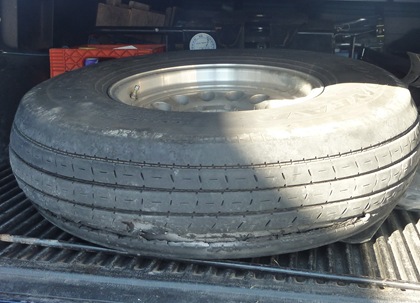 Thank goodness he has been so vigilant. If that tread would have come off again, we could have had a serious problem. As you can imagine, we are not happy with these Goodyear tires.

After our problem last year, a friend of ours had the same problem with the G rated Goodyear tires on his Carriage. We have also read on some RV Forums that others have experienced the same issue. Apparently, there was a problem with these particular tires. We will definitely be filing a claim with Goodyear to replace all of our tires.

We are in Midland, Texas for the night. Luckily, this is a pretty large town and we should be able to find a replacement tire before we head to Tucson. We don’t want to be traveling hundreds of miles without a spare.

We really enjoyed our stay at Coffee Creek RV Resort in Santo, Texas the last two nights. The park is only about four years old and is in excellent condition. The sites are FHU 50 amp pull-through. All of the buildings are super clean. The entire place was immaculate. I’ve never seen such luxurious bathrooms at an RV park. They are Passport America members, so we only paid $17.50 per night for two nights. Definitely money well spent.

We had lots of laundry to do. The washers and dryers were large and we were able to get it all done in four loads for a total cost of $10. They also had free wi-fi, although it was rather slow.

Our site was across from the bathhouse and laundry building. The pool and hot tub were next door. Here’s a view of the pool area. You can see our camper across the road. There were only about a dozen other RVs in the entire place. 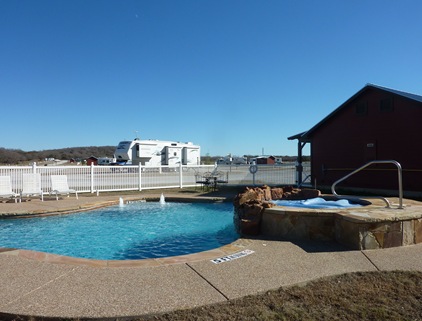 The weather has been great. Yesterday was in the 70s. We enjoyed sitting outside soaking up the sun and listening to the Wisconsin Badger basketball game on satellite radio. 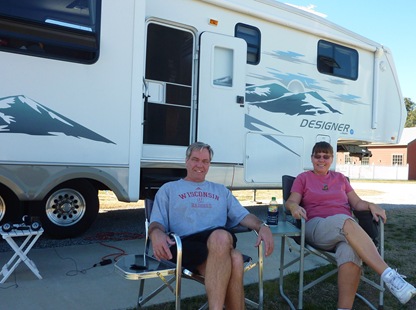 Today we drove about five hours from Santo to Midland, Texas. This is one very large state. It takes days to cross it. We spent all of today on I-20 which runs through central Texas. There were very few towns along the way, just lots and lots of red dirt, scrubby looking trees and pear cactus. I did not realize that Texas was so dry and desert-like.

We saw an extreme wildfire danger sign at the rest stop. Texas has been suffering from a drought, and it was very obvious. Everything looks very dry and barren. We did see quite a few ranches, cows and oil pumps. In fact, Midland looks like it has a lot of oil activity.

We’re at Midland RV Campground. It seems to be a very basic place, although most of the sites are occupied. I’m wondering if many of the people here are oil workers. It just seems like that kind of place. They do have free wi-fi and cable. We were able to get a discount for being Escapee members, so our cost was $22.95 for the night. We chose it because of the convenient location off the interstate.

I hope everyone had a very Happy New Year. I sure hope our tire problem is not a sign of things to come this year!