My Senses Are Confused

Yesterday we went for a 2 hour, 14 mile bike ride. Tucson has some really nice bike paths that run along the Santa Cruz River. There is no water in it, but it’s still called a river. I was talking to a local person, and she told me that there hasn’t been water in it for a long time.

The sun was out and the temperature was in the high 70s. As we rode along, the warm breeze felt so good. We passed a park where I heard the sounds of a softball game and kids playing on the playground. The smell of a charcoal grill was in the air. These beautiful flowers were growing wild along the path. 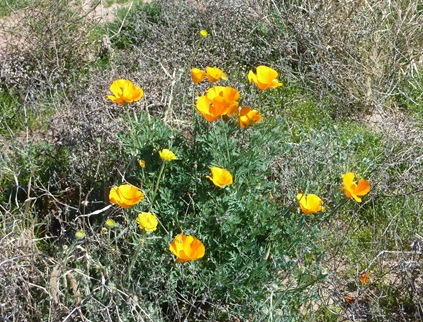 As we were almost back at the truck, I spotted a Carls Jr along the side of the path. This beautiful day had me in the mood for some ice cream. They had an Oreo Ice Cream Sandwich that tasted so good. So, I know the calendar is telling me it is February, but all of my senses were telling me it was summer!

Some of you that are in colder climates may not appreciate this post. Go ahead and send me your hate mail. I deserve it :)  But, I just have to say, we’re loving our life!! 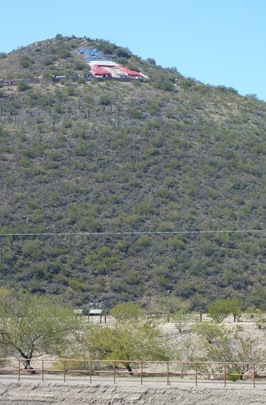 After the bike ride, we took a drive up to the top of Sentinel Peak, or the A Mountain as it is more commonly referred to. The paved bike path is right along the other side of the orange fence at the bottom of the picture. There are miles and miles of paved paths along both sides of the river.

When we got to the top of the peak, this is what the A looks like. The peak is 2900 feet high. The large stone A was constructed by University of Arizona students in 1915 as an engineering class assignment. It measures 70 feet wide and 160 feet tall. It was originally painted white, but after September 11 the colors were changed to the school colors of red, white and blue as a sign of patriotism. 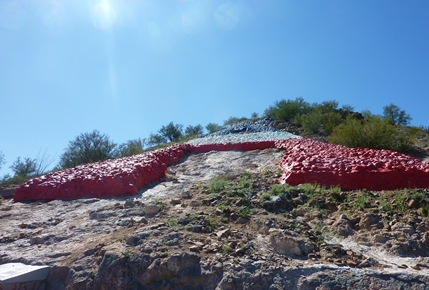 There are some very nice views of the Santa Cruz Valley from up there. The Hohokam and Pima Indians were the first settlers of this area. The Indian name for the valley was Schuk-Shon which means at the foot of the black mountain. The Spaniards pronounced it Tucson and that’s how the city got it’s name. The tall buildings on the right are the downtown area. 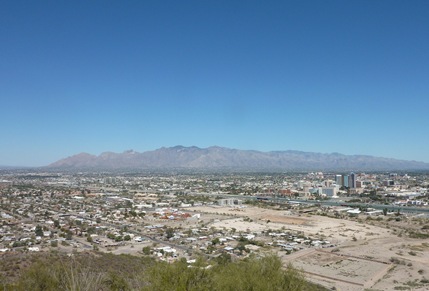 We saw more quail on our hikes in the desert last week. I’m thinking the warmer temperatures has caused them to be more active. Most of the time they are running along the ground. But, we happened to catch this guy sitting up in a tree. 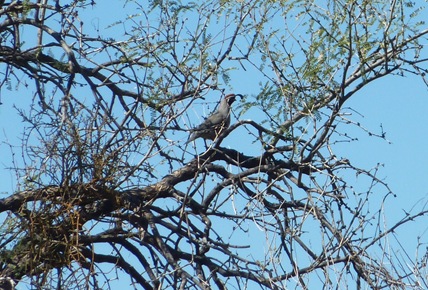 More and more little flowers are popping up in the desert. It amazes me that these flowers grow out of the sand and rock. 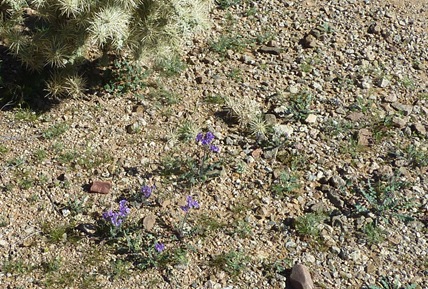 Last week we had an absolutely gorgeous week. Today a front came through and winds were gusting up to 50 mph. No walk today. I spent the day working on a new sewing project. The rest of the week is supposed to be less windy with temps in the high 60s to low 70s. I think we can handle that.

Posted by RV Khronicles of Kevelyn at 8:19 PM 6 comments: Links to this post