We left Seward on the Holland America Nordham ship at 8 pm Sunday. This was our first time on Holland America, and it was very laid back compared to other cruises we've been on. The ship just pulled out without any fanfare or party. Strange! Monday was an at sea day. It was cool and rainy, so we sat by a large window and watched the scenery.

I got sick on Sunday with a bad sore throat and cold, and Kevin got sick a few days later. The worst part was they had no cold medicine for sale in the shops. Many people were sick. In fact, a few days in they put a letter in everyone's room about the inordinate amount of people with respiratory illness on the ship. I guess all that hand sanitizer didn't help much.

On Tuesday we spent the whole day slowly cruising through Glacier Bay National Park. Park rangers actually came on board for the day. They do what they call a controlled collision where their small boat bumps up along the cruise ship, they throw down a rope ladder, and the rangers climb up. Wow! The rangers gave a talk in the main theater, and also commented throughout the day over the loudspeakers on deck. It was a good idea, but too hard to hear in many of the outside locations. Once again, it was cool and overcast with light rain at times. 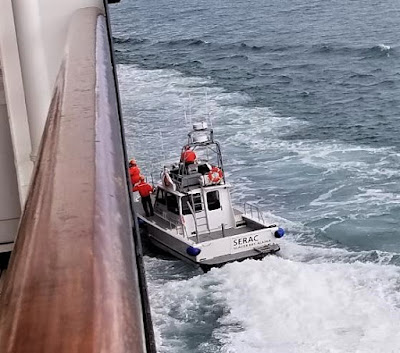 The first glacier we saw was John Hopkins Glacier. The actual colors are much more vibrant. 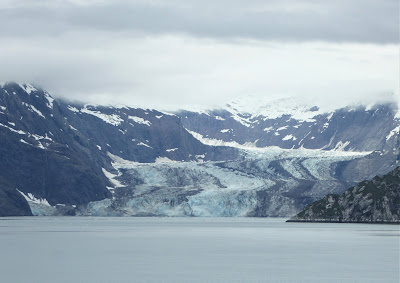 Next up was Lamplugh Glacier. 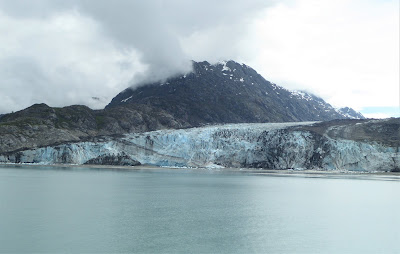 Only two cruise ships per day are allowed in the bay. We passed this other Holland America ship. 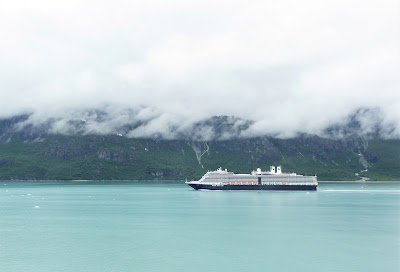 At the end of the bay is Margerie Glacier. This is the big one that you see on travel sites. From what I'd seen on TV, I expected it to be bigger. It was big, as we were on the tenth deck of a ship, but I expected more somehow. 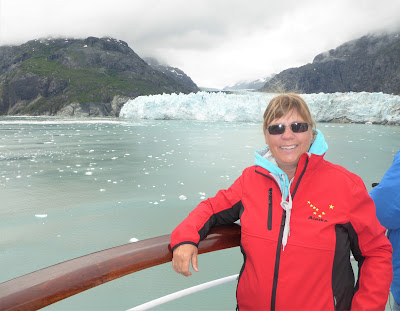 The captain stayed at this glacier for over an hour, doing a complete 360 degree turnaround so everyone could see. There were several times where pieces fell off, called calving, and I heard the rumble from that. Again, it wasn't what I expected based on what I'd seen on TV. It was hard to get any photos, but here is one where the ice just splashed into the water. See the brown splash at the bottom? There was a smaller tour boat closer to the glacier. It gives you a bit more perspective on the size. 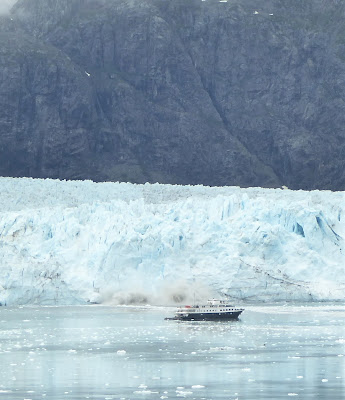 Again, the colors were much more vivid in person. 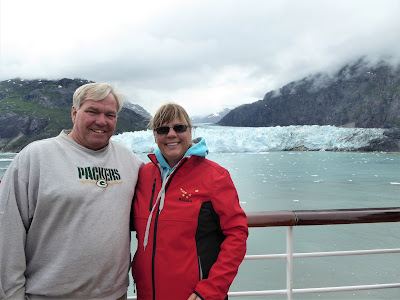 There is another glacier at the end of the bay called Grand Pacific Glacier. It was covered with rocks and debris, so didn't look like much. It goes way back into Canada. Notice the chunks of ice floating in the water. There were pieces of ice like this all throughout the bay. 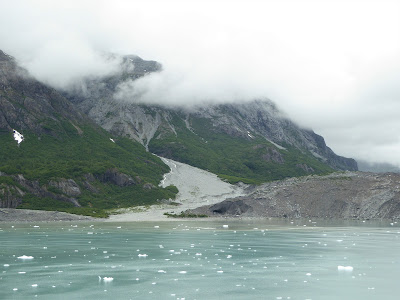 The scenery all day in Glacier Bay was again breathtaking. We saw several waterfalls. 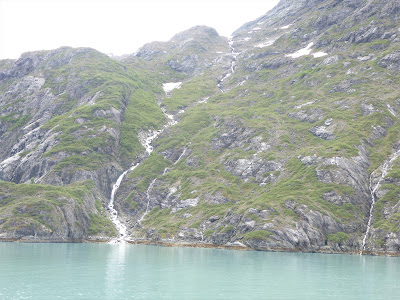 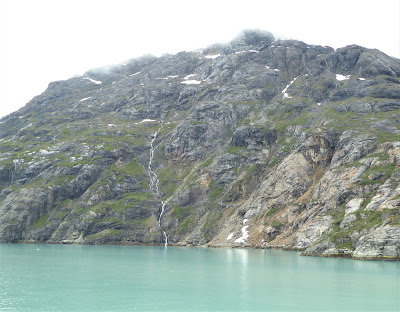 Don’t wish upon a star – Reach for one!
Posted by RV Khronicles of Kevelyn at 12:12 PM No comments: Links to this post

Yesterday we drove about 100 miles to Mount Rainier National Park. It was a beautiful, clear day when we started out from Seattle at 9 am. As we got south of Seattle, we began to see views of the mountain. I had heard on the news that Mount Rainier can be seen from Seattle on clear days. It was an amazing site!! 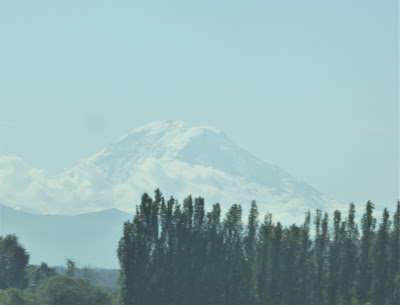 In April of 2010, we had flown to Seattle for a family vacation. We drove to Mount Rainier that week, but didn't realize it was still winter in the park. We only got about ten miles into the park to The National Park Inn. The road beyond was closed due to a tree coming down in the snow. In fact, the power went out while we were there.

Here is the view of the mountain we had on that trip. We really didn't see it due to the clouds and fog. 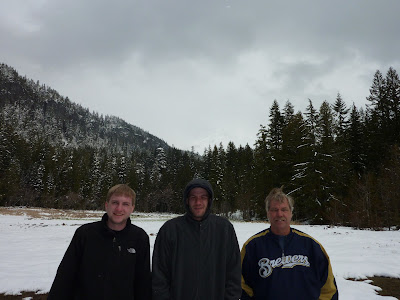 Here is the same location yesterday. Quite a difference. The mountain was actually in the clouds quite a bit yesterday as well. It is 14,410 feet tall, the tallest volcano in the Cascade Mountain Range, the most glaciated peak in the continental US, and creates its own weather. Luckily, the clouds broke up a few times to get a decent view. 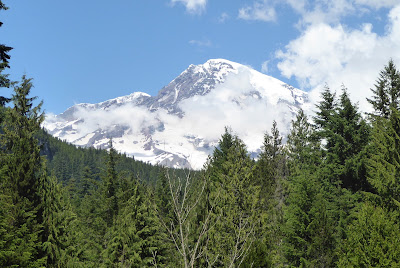 We were able to drive up to the Paradise Visitor Center. It's about a 45 minute drive from the park entrance to get there. We watched the informative movie, and then took a hike up to Myrtle Falls behind the center.

At that point, the mountain was mostly in the clouds, but we were able to see some of it and some of the glaciers. 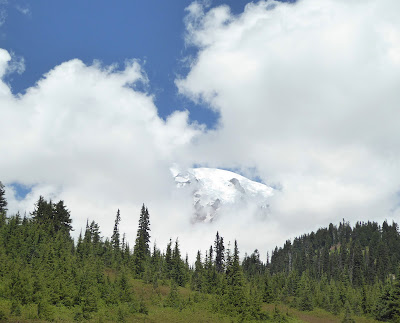 The waterfall was beautiful. 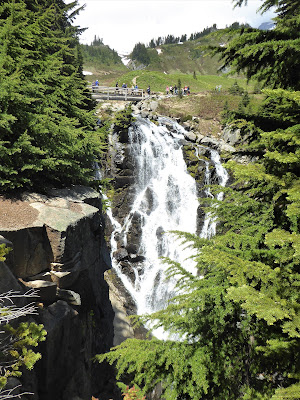 Here's a view from the trail in the opposite direction of Mount Rainier. There are several mountains on that side of the park that are also part of the Cascade Range. Beauty everywhere we looked. 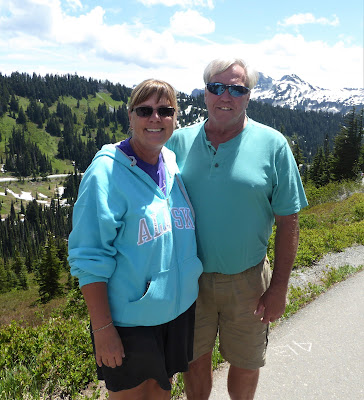 What an amazing location for a visitor center. 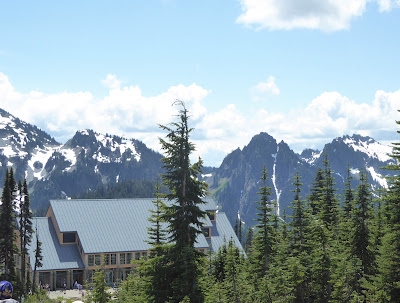 The Avalanche Lilies were blooming all over the meadows. Other wildflowers bloom somewhat later in the summer. The lilies are the first to pop out through the snow. 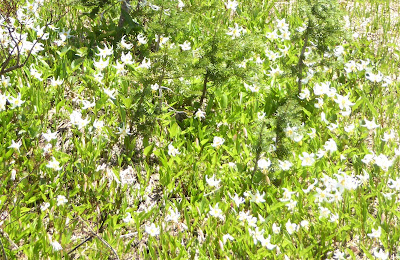 Here's a picture from inside the visitor center of what it looks like when the flowers are in full bloom, and the mountain is completely visible. 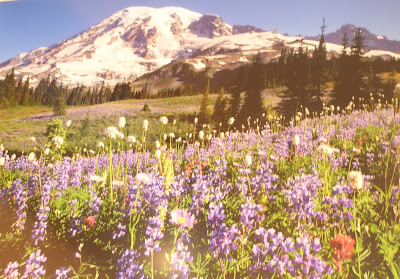 On the drive back down, we stopped at Narada Falls. There is a trail that goes down about 400 feet to an overlook. Well worth the climb to see this. Notice the rainbow at the bottom. Beautiful!!! 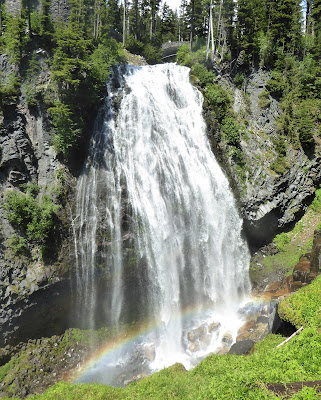 We stopped at the Longmire Museum next to The National Park Inn. This area was developed in the early 1900s for visitors to come and enjoy the hot springs and to soak in the sulfur pools. Mount Rainier National Park was the fifth National Park developed in 1899. Roads were established in 1907, and this early gas station was built. The pumps are original. 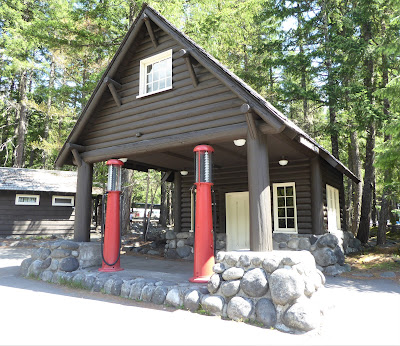 I'm glad we took the time for a return visit to this amazing National park. While we were at Denali in Alaska, we purchased the National Park Senior Pass for $80. The price went up from $10 last year, just a few months before Kevin was eligible. Still a good deal, though as the entry yesterday for the day would have been $30 without the pass.

Don’t wish upon a star – Reach for one!
Posted by RV Khronicles of Kevelyn at 11:33 AM No comments: Links to this post