We've been in Yuma for three weeks now. The first week was spent transferring some of our things from the RV to the park model and meeting with contractors. I started with six appointments. Two of them cancelled, so that left me with four estimates. It took about a week of waiting around for them to show and then waiting for the estimates. Two of them were quite a bit higher than I expected, one guy seemed very confused, and one guy had a price in line with what I was anticipating.

So, we've hired Victor's Number One Remodeling to replace all of the windows and patio door, scrape the popcorn ceiling, texture and paint the ceiling and walls, replace all flooring, and paint entire outside. The windows take about three weeks to make, so the plan is they will start work in early December. We are flying back to Wisconsin from Dec. 11 through the 18th, so they plan to do all the inside messy paint work while we're gone. Hopefully, that will all come together.

In the meantime, we've tried not to bring too much stuff from the RV as we have to move it all out to get the painting done. Good thing a golf cart came with our place, as we are running back and forth to the RV getting stuff we forgot or need. We were able to rent a storage space for the RV on the resort property, so its not a big deal having to go get stuff. For now, we've left the slides out so we have access to all storage areas.

We have done a little decorating in our backyard. While visiting Korey, he took us to Costco. I found this pretty whirly to put along our back fence. I love how it looks. Kevin has also hung his Packer and Wisconsin windsocks, so it's looking nice back there. 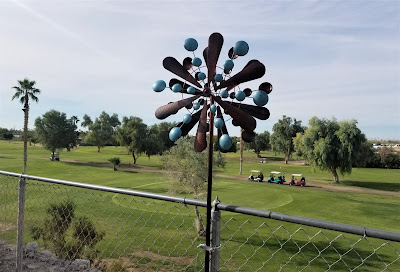 Last Saturday night the resort sponsored a welcome back party at the clubhouse. Over 500 people attended, and lots of the snowbirds aren't even here yet. With 1200 sites, this place becomes a small city in the winter. We had a quarter chicken, baked potato, corn on the cob, cookie and free beer and wine all night. They really do a nice job of giving back to their customers here at Fortuna de Oro RV Resort.

One of the park model residents has a very unique motorcycle and trailer. He had an interesting passenger for Halloween. Click on the picture to enlarge if you want to see better. 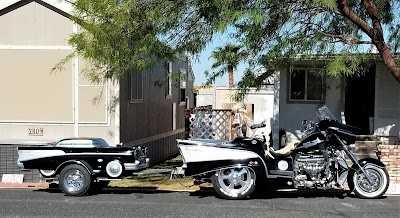 We've been to the pool several times as it was near 90 for the first two weeks we've been back. Last week it cooled down to the low 80s, with 50s at night and low humidity. Perfect weather. We've also golfed a few times. Kevin has joined the men's group, and I've joined the ladies group. We also golf on Friday afternoons in a mixed scramble group. They are all a lot of fun.

Tonight we're participating in the night golf outing. For $25 each you get 9 holes of golf in the afternoon, a chili dinner, prizes, and then 9 holes of golf after dark. They shorten the holes at night, give you a glow in the dark ball and put solar lights along the fairways so you can see enough to play. We've never done it before, but heard it's lots of fun. We'll see how it goes.

Yesterday was the softball opener. Fortuna's team played the team from our neighboring resort. There was free beer, wine, soda, water, hot dogs, chips, peanuts and cracker jacks. We had a good time watching some softball and enjoyed a free lunch to boot. 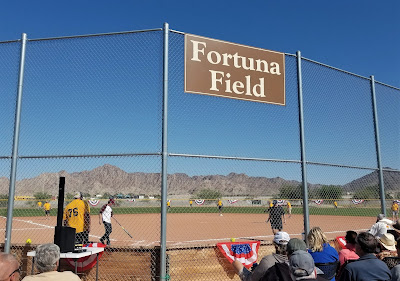 We've been dealing with the absolute complete incompetency of DirecTV since we got here. It's a VERY long story, but I'll give you the short version. We called them to let them know we moved and to get another box for the new TV Kevin bought for the Arizona room. The first technician couldn't help us because they had the work order incorrect. The second technician installed the correct box, but it was defective. They were supposed to ship a replacement box, but shipped the wrong box. They are now coming next Saturday with the correct box. In the meantime, we've wasted literally hours of our time on the phone trying to get them to do what we asked for. We have another TV to watch, but since AT&T took over, they have hands down the worst customer service we have ever experienced. The good news is that we've gotten $140 in credit because of their incompetency. I am totally ready to switch providers, but Kevin likes his DirecTV package.

The park model came fully furnished. Much of what was here is not to my taste. Since we have to remove most everything to have it painted, I've been trying to get rid of as much as I can. We'll buy some new furniture once the remodel is complete. I've been able to sell quite a few items of Facebook Marketplace. More waiting around for people to show up.

The second Tuesday of the month, the park allows everyone to have a yard sale. People come from all over Yuma, so this coming Tuesday I'm going to put out some of the bigger stuff and see if I can get rid of it.

So, you can see we've been quite busy since we got here. Once the works starts, we'll have a few weeks of construction mess, but it will be so worth it once its done!!

Don’t wish upon a star – Reach for one!
Posted by RV Khronicles of Kevelyn at 1:32 PM 3 comments: Links to this post