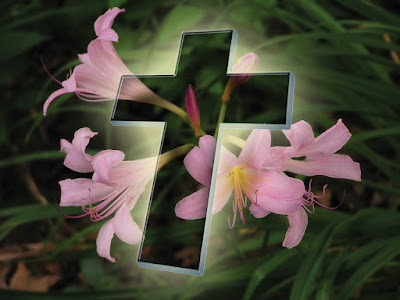 Kevin and I wish you a Blessed Easter Day. We made it to Lincoln, Nebraska on April 5th after a few longer than normal driving days for us. We like to keep our driving days to about 200 miles. In order to have more time in Lincoln to help Korey and Cathryn, we did some 300 mile days. Not a big deal.

Both kids had off on April 6th, so they took us over to see the new home. It's a great house and I'm sure it will serve them well for many years. It's about 20 years old and in very good condition. 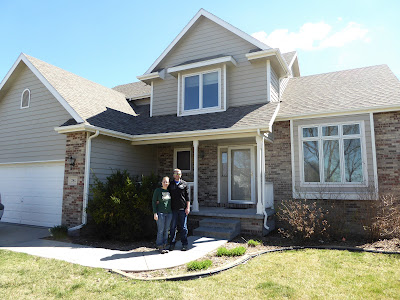 Since this is their first home, they don't have some of the tools needed to be homeowners. We headed to Home Depot to pick up painting supplies and some paint color samples. Back at the house Cathryn painted sample colors on the walls. Korey and Kevin had a lesson on how to replace a light fixture and a faucet, and I began stripping the wallpaper in the foyer. Luckily, that was the only room with wallpaper.

I had prepared taco meat and fixings ahead of time, so we went back to their apartment and had a last meal together there. It was a nice apartment, but they are so happy to have their own home now with much more storage space.

Both of them had to work on Friday and Saturday, so Kevin and I spent those two days painting. We've painted our fair share in our years, and have a good routine for us. I do the cutting in and Kevin does the rollering. We ended up painting the family room, master bedroom, dinette and kitchen. Here are some before and afters of the family room and bedroom. 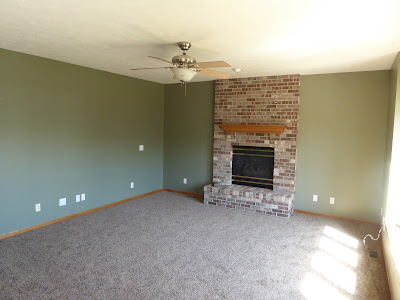 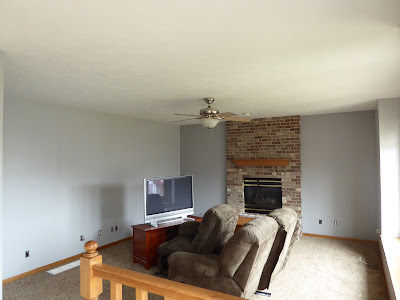 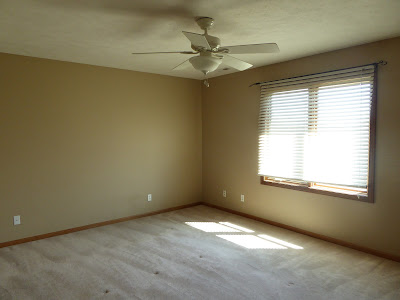 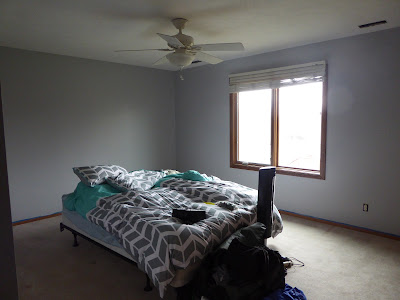 They chose colors in the gray tones. The woodwork is a medium oak, and the gray walls help tone down the wood color. It turned out very nice.

They were both off work on Sunday, so that was moving day. Kevin had emptied out the back of our truck, and we were able to move all of their large items using just our truck. No need to rent a moving truck. Their apartment was on the second floor and the bedrooms in the house are on the second floor. We were sure tired, but we got all of the big items moved. Their lease on the apartment doesn't end until early May, so they have lots of time to move the rest of the smaller items and get everything cleaned up. Nice not to have to do all of the moving in one day.

All of the climbing up and down stepladders doing the cutting in for the painting, as well as up and down stairs for the moving did a number on my knees. About eight years ago, I tore the ACL in my right knee and had surgery. It's never been right since then. I also have arthritis in both knees, so they were not happy with me. Icing and ibuprofen helped, and they will be fine after a little rest. Just a reminder that our bodies are not as young as they used to be.

We spent two more days painting while the kids were at work and finished all the projects we had planned to do. Maybe next year we'll go back and paint some more, but this was enough for one trip. Kevin was also able to help with a few other projects; installing a new light fixture, caulking, a new motion sensor light switch, new thermostat, caulking and cabinet adjustment. A very fruitful week.

Anyone who full times in an RV knows that things break. It's probably the thing that is most frustrating as RVs are known for not having the best construction. Also, it is hard to find quality repair facilities, and where do you go if it needs to be in the shop.  We had a few problems over the winter. It sure helps that Kevin is pretty handy.

On one of our trips, I came inside to find glass all over the counter. One of the pendant lights had loosened and crashed into the other one, causing it to break. It makes no sense to have lights that can swing in an RV. We're thinking that the motion of traveling loosened the screw, and we didn't notice. 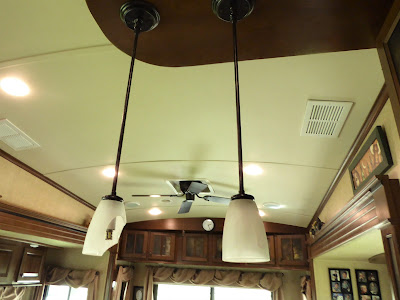 At one of the stops in Florida, our automatic leveling jacks weren't working. One of them was making a terrible ratcheting sound. I did some online searching for Lippert jacks, and found a troubleshooting guide. As I read the steps, Kevin was able to do everything needed to reset the jacks. Success! They have been working great since.

We also had trouble with our Schwintek slides in the kitchen and bedroom. We were able to reset the control panel and get them working. On our last night in Iowa before getting back to Wisconsin, the kitchen slide would not go out no matter how much resetting we did. One side was not working. We were able to get into our refrigerator, so had sandwiches and called it a night. Thank goodness it didn't stop working while it was out. The sunrise in Iowa was beautiful! 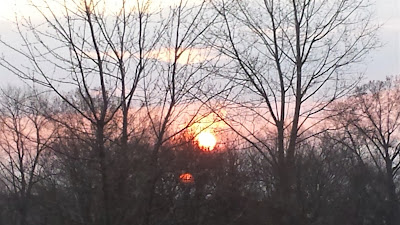 We were fortunate to find Complete RV Repair in Beaver Dam, Wisconsin last fall when our refrigerator stopped working. Mark came out to the campground on Good Friday and determined the motor on one side of the slide was broken. He said that these Schwintek slides are terrible, and he doesn't feel they are made for bouncing down the road. Once he got the motor out, he and Kevin were able to pull the slide out on that side while I pushed the button to get it moving on the other side. He will order a new motor and install it when he has some time. No hurry; we're here for six months.

It's great to be back in Wisconsin. Today we're going to my mother's for Easter. I can't wait to see our son Eric and my mom as we haven't seen them since Christmas. Also, it will be good to be back to work for the summer as Florida was pretty expensive, and it's time to replenish the bank account.

Don’t wish upon a star – Reach for one!
Posted by RV Khronicles of Kevelyn at 7:51 AM 3 comments: Links to this post