I hope all the fathers out there had a happy Father’s Day. Our son Eric was on call for the weekend, so he came out and visited with us last weekend to celebrate Father’s Day.

Yesterday was a beautiful summer day, so we decided to take a little road trip to New Glarus, Wisconsin to tour the New Glarus Brewing Company. They are most famous for their Spotted Cow beer.

The brewery was started in 1993 in an abandoned warehouse with used brewpub equipment. In 2006 they opened a $21 million new facility on a beautiful hillside location on the outskirts of New Glarus. The complex is designed to look like a Bavarian village. They are the 21st largest craft brewery in the country.

We arrived around noon and were surprised how packed the parking lot was. We looked around the gift shop which was doing a brisk business. We followed some signs to the self-guided tour. The facility was big and sparkling clean. There were, however, no signs explaining what we were seeing. Since it was the weekend, none of the machinery was operating. In the bottling area, there was a silent video showing the bottling process.

There was one employee to answer questions. I asked him why the beer was only sold in Wisconsin. He said they can barely keep up with demand for their Wisconsin customers, so there is no need to sell in other states. He was kind enough to take our picture in front of one of the three huge copper vats. 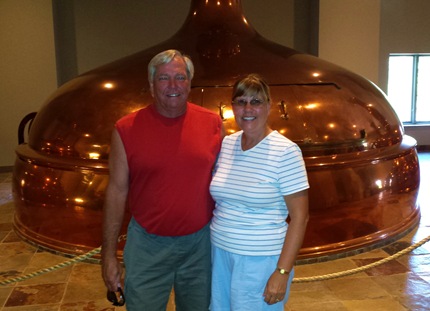 After we wandered around, we went out to the patio beer garden. There were three choices for sampling. Each included a beer glass. Kevin chose the $8 pint option and chose the Totally Naked beer. Refills were available for $5.50, but he didn’t try anything else. They also gave us a coupon for a small tap beer available at several pubs and restaurants in town. 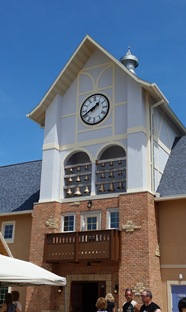 The building had this clock tower. The bells played a song on the hour. It really reminded me of our trip to Germany. There was a beer depot store on site. Twelve packs of their standard beers were selling for $18. That definitely wasn’t any kind of a deal, so we didn’t buy anything. Our impression of the facility was that it is a very nice place, but the tour was disappointing. Some signage would have been very helpful.

The view from the beer garden reminded me of a typical Wisconsin countryside. Rolling hills with green pastures dotted with farms is what you see while driving through much of the state. 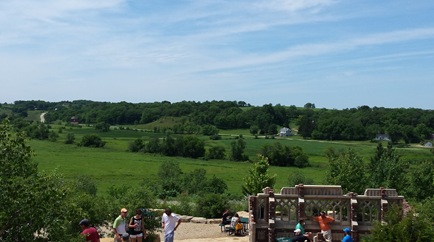 We left the brewery and drove back into the downtown area. There were lots of people wandering around the shops, pubs and restaurants. We looked around in some of the shops. New Glarus was founded in 1845 by a group of Swiss immigrants. Most of the buildings are in the Swiss style. I heard quite a bit of German being spoken.

We sampled some cheeses in the cheese shops. We found a pub that had some seating available and Kevin used his coupon to sample another New Glarus beer called Two Women. He enjoyed both beers he tried. After wandering around for a little longer, we headed home.

Strong storms are headed our way for today, so we’ll keep our fingers crossed and hunker down. We had planned on golfing this afternoon, but I think those plans will have to be cancelled.