When watching the devastation of Hurricane Sandy on TV, I never dreamed we would feel any consequences from the storm. It’s nothing compared to what those poor people on the east coast are suffering, but these types of catastrophic events have long reaching tentacles.

Shortly after the hurricane hit, orders started declining at all Amazon facilities. Its no wonder with such a concentrated population in the worst hit area. On Tuesday night we were sent home a little over an hour early. On Thursday night when we reported for work, we were told that we would only be working half shifts both Thursday and Friday nights. My feet were doing a happy dance, and I was glad to have two more nights of normal sleep. However, we’re here to make money. So far, we’ve only worked one full shift.

I’m not complaining. I know from last year’s experience that there will be plenty of LONG shifts soon. Thanksgiving is early this year, so within another week or two, we’ll be working plenty. In the meantime, we have time to relax. And, as a bonus the weather has been fantastic the past week. Sunny, calm winds, and highs in the 80s. The upcoming week is supposed to be similar with highs in the 70s. No complaints here.

Last night we attended a CamperForce get together at Pizza Hut in Coffeyville. They have a group room which was filled with fellow Amazon work campers. We met some new people and chatted with some people we already knew. Good food and good company. Here we are enjoying ourselves. I think Kevin was having an intense conversation about something. 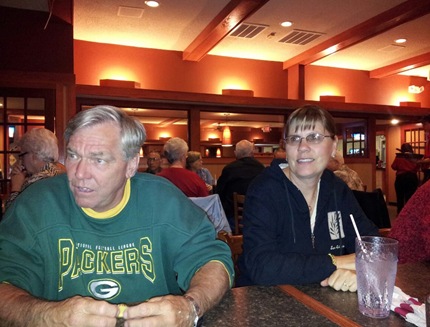 In my previous post, I had a picture of a converted bus that arrived at the campground. I thought it was the same bus that was here last year. But, I believe I was mistaken. These people have three daughters, and the bus last year had boys.

I received a comment from Greg letting me know these new people have a website at theschollbus.com. They certainly have an interesting set up. I spent some time reading about their adventures. Another example of people who seem to be very happy in a non-traditional life. Good for them!

The Green Bay Packers game is again not on TV this week. Can you believe the local FOX channel is broadcasting soccer instead. At least we have computers and satellite radio. Go Pack Go!