Prior to yesterday we had seven days in a row with rain. We did manage to take some walks during that time, but not much else. Highs last week were in the 50s. Time to be heading south.

Yesterday the sun finally reappeared. Temperatures were still in the high 50s and we had frost the last two nights. However, the forecast for all of the upcoming week is highs in the mid 70s. That’s more like it. With the frosty conditions this morning, the lake was steaming. 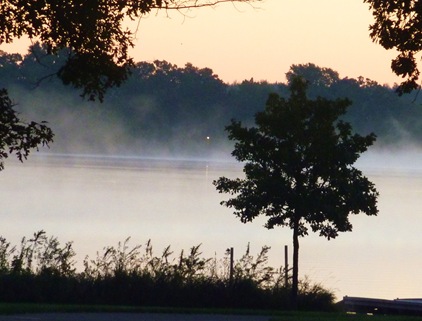 Since it was sunny yesterday, we decided to take another bike ride on the Wild Goose State Trail. I thought the leaves would be full of color.  We had a nice ten mile ride, but there was very little color. Quite a few brown leaves were on the ground, but the trees were still full of green. I’m thinking the trees along the trail aren’t the colorful type. There was some beautiful red sumac. 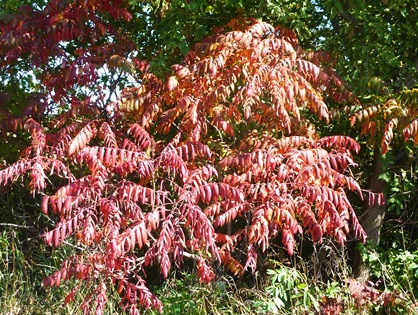 The fuzz is coming out of the Milkweed pods, and there’s lots of Goldenrod around. Not good for allergy sufferers. You can see the dry cornstalks in the background of the picture. I’m amazed how many corn fields have not been harvested. I ‘m not positive, but I think they grind up the entire dry cornstalk and use it as silage to feed the cows during the winter. 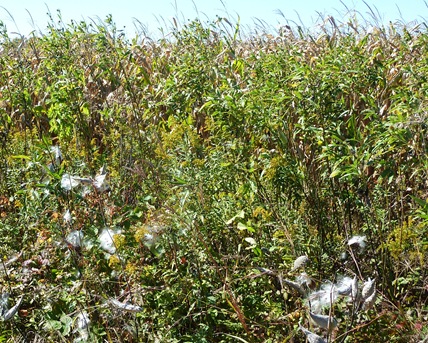 We got home in time to watch the Milwaukee Brewers win their first playoff game. After that, the Wisconsin Badgers handily beat the Nebraska Cornhuskers. Today the Brewers play game two, and the Green Bay Packers have a game. Kevin is in sports heaven right now!

Our park has several Shaggy Bark Hickory trees. The last two weeks, there have been a number of people coming by and collecting the nuts. I asked one couple what they do with them. They told me they are very tasty, and they also sell them. After a little online searching, I found out people are selling them for $9 to $12 a pound. I had no idea. I’ve been collecting a pocketful on my walks. So far, I have collected this many. 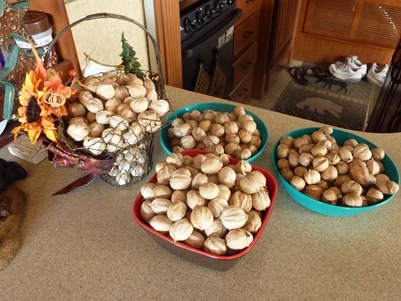 I understand they are difficult to crack and get out of the shells. I’m letting them dry out for a few weeks, and then I’ll see how it goes. I did crack open a few of them, and they are very tasty; reminded me of pecans.

On Thursday we went back to the dentist. Kevin had his root canal and I had a cavity filled. About $1,100 later, we’re in good dental shape again. Hopefully, other than cleanings, that’s it for several years.

We leave a week from tomorrow. Lots to accomplish this last week!