Memorial Day Weekend was the first time since we’ve been here that all of the sites were occupied.  Although we observed some interesting people, overall things went quite well.

Since we are located on a large lake, most of the people who camp here seem to be all about the fishing.  Many have boats.  We had a few families with young children, some older couples, some groups with several sites together.

The people in the two sites right next to us has some unusual tents.  They looked like tents used at fairs or encampments.

This same group of people had reserved our indoor shelter for Saturday.  There had to be about 25 cars filling the parking lot and overflowing onto the grass.  I’m guessing they had at least 50 people. 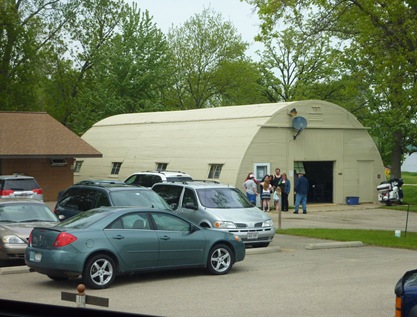 It looked like they had a great time, and they did a wonderful job cleaning up the building before they left.  However, some of them stayed and continued to party well into the night at their campsites next to us.  Thank goodness for earplugs.  We could have gone out and told them to be quiet, but since they hadn’t caused a problem the rest of the weekend, we let it go.  I don’t think people realize how far sounds carry at night.

The only other complaint I have is about payment.  Most of the sites had been reserved and paid for in advance.  However, two of them came a day earlier than their reservations indicated.  Lucky for them, the sites were available.  That’s not always the case as we have had a number of people come during the week and stay for a few nights without a reservation.

Anyway, these people came a day early and then didn’t pay the day they arrived.  I had to remind them a couple of times that they still owed money.  We have a self-registration system where they fill out an envelope and put the money in a slot in the office door.  They don’t pay us directly.  I’m going to have to start demanding payment while I wait.

In the 30 plus years we’ve camped, we’ve never expected not to pay the day we arrive.  Can you imagine checking into a hotel and telling them you’ll pay in a day or two.  Unbelievable!

There’s a new bird in town.  We’ve seen many red-winged blackbirds, robins, orioles and blackbirds.  Last week, we had a cardinal visit us. He sure is beautiful. 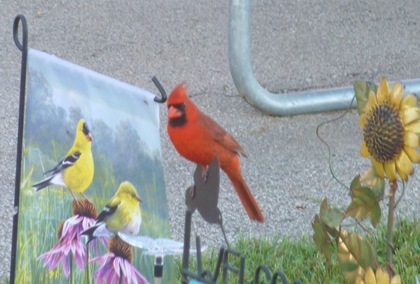 So, we survived the busy weekend.  The weather was okay.  Saturday and Sunday were a bit cool, overcast with a little rain.  Monday the heat came.  It was 89 degrees and very humid.  We literally went from running the heater one night to the air conditioning the next day.  Today is supposed to be in the 80s, as well.  That’s crazy Wisconsin for you.  I’m not complaining, though.  We’ve had a very cold and wet spring so bring on summer!

Kevin and I marvel at the mass exodus of people on the last day of the weekend.  Monday was by far the nicest day of the weekend, yet 75% of the people had left by 10 a.m.  What’s the hurry?  Check-out isn’t until 1 p.m.  In our many years of weekend camping, it seemed the last day was often the nicest.  We would try to stay and enjoy as much of that last day as we could.  That work at home could wait a few more hours :)