When we left Redmond, Oregon the temperatures were over 100 degrees. A few hours later we arrived in Waldport, Oregon on the coast to temperatures in the 60s. That's a drastic change, but welcomed after all the heat on our trip so far.

We stayed at McKinley's RV Park and Marina with a site overlooking the bay. What an awesome view. Here's what our view looked like after we got set up the first afternoon. 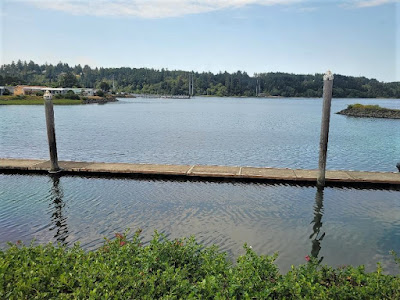 What a surprise it was to wake up the next morning to this view. 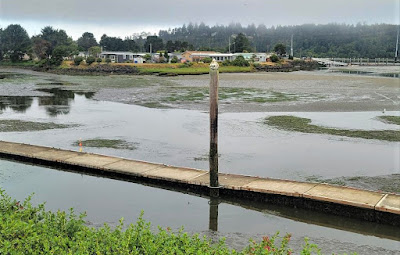 We are not used to being in areas where the tide is a big part of life. It was fun each day watching the water come back in. Lots of birds enjoyed the easy fishing during the low tide including this egret and heron. 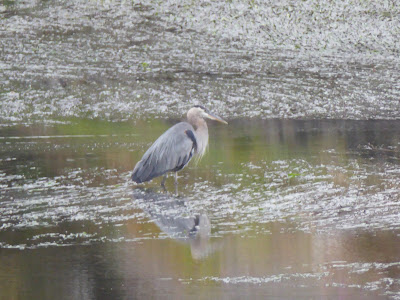 The park has rental boats with all the equipment needed for crabbing for $100. We saw people coming back with lots of crabs. For a small fee, the park will even cook them for you. We didn't go because we had plans to crab with friends we were meeting at the next stop.

We did go to the Devil's Churn lookout area. It's a crevice that has eroded in the lava rocks. During high tide waves come crashing in. We went near high tide, but didn't see many crashing waves. It was still a beautiful area. 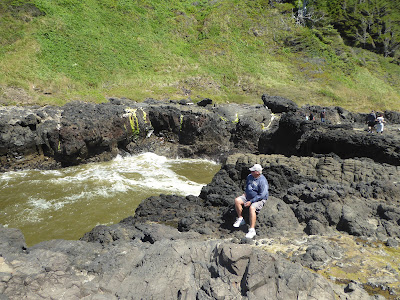 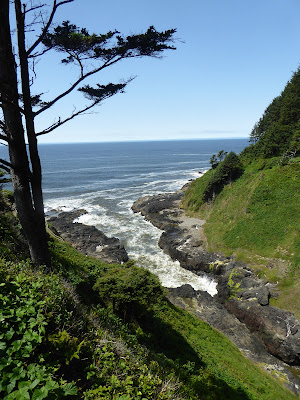 The next day we golfed at a cute nine hole course called Crestview in Waldport. Here's Kevin putting. Over the trees you can see the marine fog layer over the ocean. Every morning we woke up to fog which burned off around 10 am. But, over the ocean there was often a layer of wispy fog. 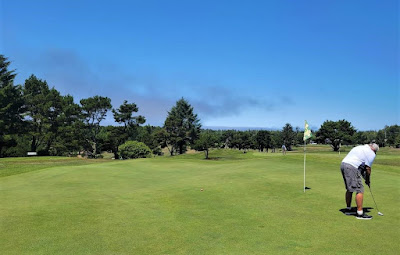 There were lots of pretty flowers on the course. 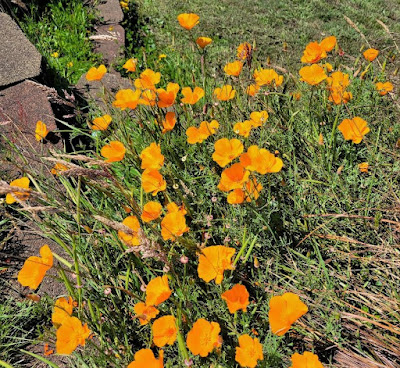 There are many bridges along the coast crossing over bays. Most of them were designed by Conde B. McCullough in the 1930s. Prior to building the bridges, it was not possible to travel the Oregon coast without being ferried across the bays. He designed the bridges in the art deco style with pillars which were to represent the Empire State Building. 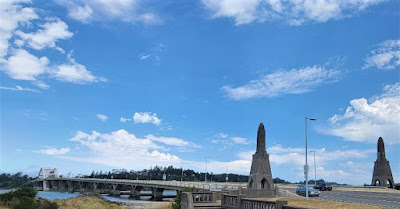 More beautiful flowers at the Waldport Visitor Center. There are gorgeous flowers everywhere along the coast. They have the right climate to grow so many different varieties.

This seal statue in front of the center was so cute. 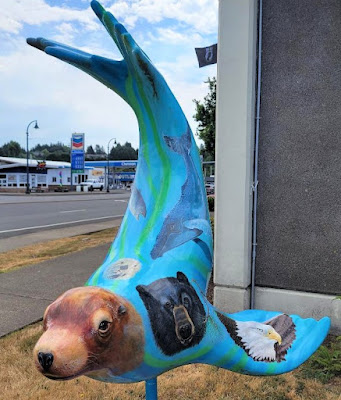 After four days in Waldport, we headed 16 miles north to Newport to meet up with friends from Yuma, Brad and Martha. We stayed at the Newport Marina and RV Park. Our sites were in the annex area behind a Super 8 Motel. This was a first for us being parked under the balconies of a motel. 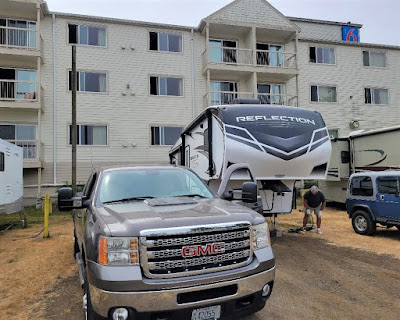 It was a great location, though within walking distance to the Newport Fishing Pier where you can do some crabbing. That was the plan. Unfortunately, two weeks before we arrived; there was a major sewage spill into the bay and this was the warning sign we encountered at the entrance. 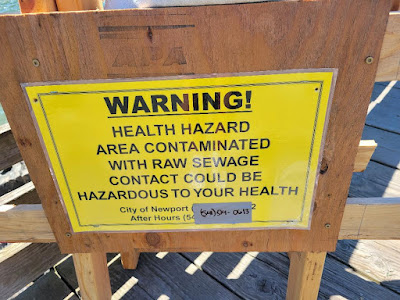 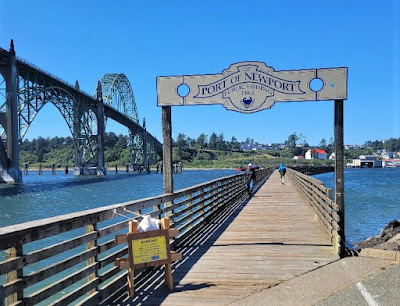 There were some people still crabbing off the pier, but we decided not to risk it as we will be spending a month in Garibaldi after this where the crabbing is supposed to be even better.

These seagulls were lined up on the pier waiting for a treat. 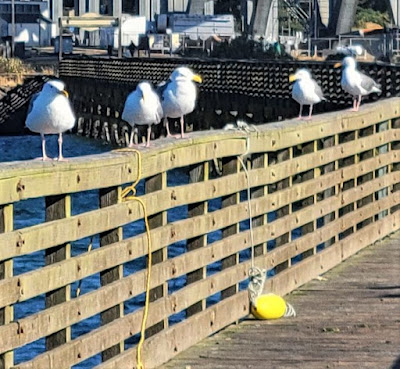 Lots of birds were on top of these pylons under the bridge, and a fishing boat was making its way back to the marina. 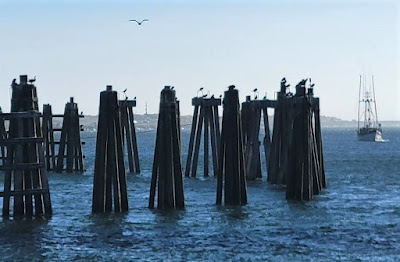 Since crabbing was off the table, we found plenty to occupy our time in Newport. We wandered around the old area along the bay. Pacific Seafood is a large fish processing company in Newport. Here are the tiny salad shrimp being processed to sell. They are yummy!! 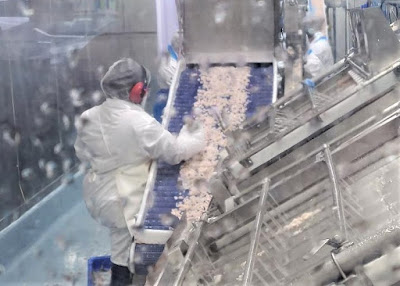 This mural was on one of their buildings.

A gorgeous hydrangea bush along the sidewalk. 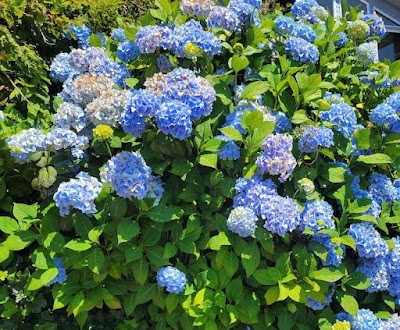 Some other activities we did included golf, a little shopping, farmer's market, and an art, oysters and brews festival. I didn't take pictures at any of them. Having too much fun, I guess. The highlight for me of our stay in Newport was going to the tide pools at the Yaquina Head Outstanding Natural Area. This is a federal land area with beautiful coastline, a lighthouse, visitor center and trails. I had read that the best tide pools along the central coast were to be found here. We checked the tide tables and headed over in time to try and view lots of sea life in the pools. It was amazing!!
Here's the view from the viewpoint outside of the visitor center.

Here's the view of the tide pools from above and some of what we saw in the them. 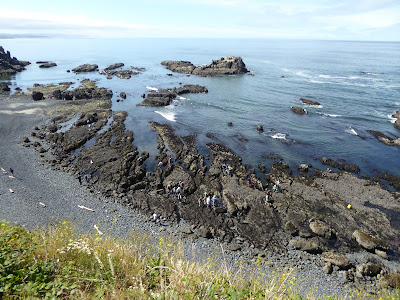 There were also Harbor Seals, Sea Lions, Pelicans and lots of other birds on the rocks. 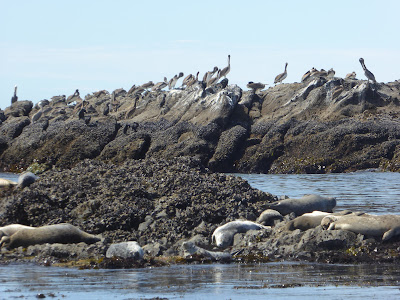 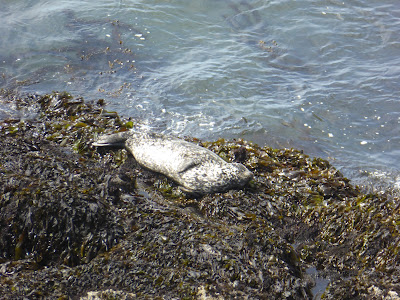 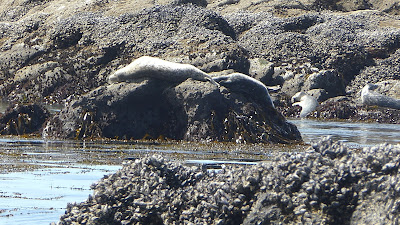 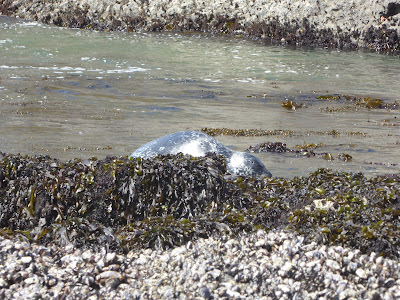 Brad and Martha among the rocks. There were all kinds of barnacles and other shelled creatures attached to the rocks. 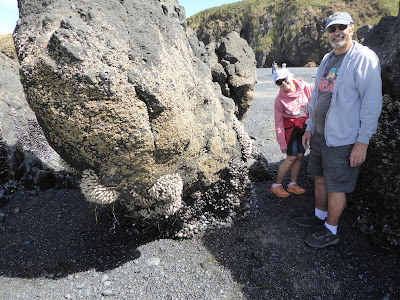 Views of the tide pools, lighthouse and ocean from below. 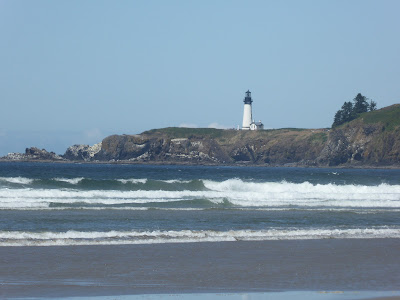 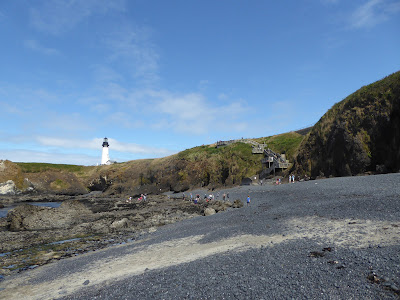 We trekked back up the stairs you can see in the picture above to take a look at the lighthouse. It was closed for refurbishing, so we couldn't go inside.

Beautiful view of the coast from up there.

These rocks are called the dinosaur. I can see it. 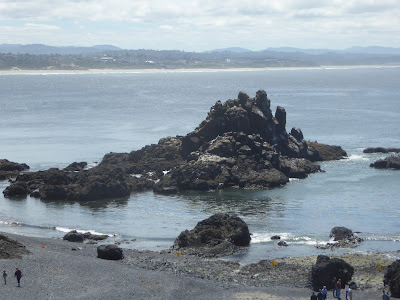 Across the street from the RV park is the huge Rogue Brewing facility. I thought this entrance to the restaurant and bar was unique. Notice the huge geraniums in the barrels. We did some tasting, and Kevin enjoyed a few of their brews. 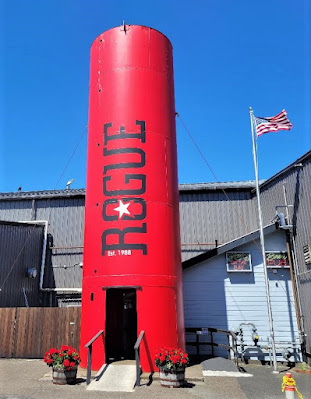 Loads of seagulls were seen sitting on the metal roof of their buildings every day. It must be warm up there. The roof was gray, but in the heavy seagull areas, it was white. Ha!

So, that wraps us this leg of the trip. We had a great time in Waldport and Newport, and are now headed to Garibaldi for a month. I'm sure many more adventures await.
Don’t wish upon a star – Reach for one!
Posted by RV Khronicles of Kevelyn at 11:49 AM