We spent four days in this area staying at the Expo Center RV Park in Redmond. It was over 100 degrees each day, so we decided not to golf as originally planned. What to do instead. Visit microbreweries!!

This area is near the Cascades Mountains. Three of these mountains are called the Sisters, and are very prominent. Beautiful views from just about everywhere. 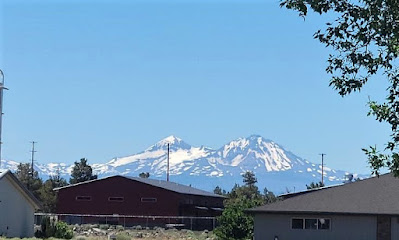 Brews were sampled at three breweries in Bend. We actually stopped at five, but the Bend Brewing Company had a long wait time and the Silver Moon Brewery didn't have any brews that appealed to Kevin. He doesn't like IPAs, and that seems to be the prominent type of beers brewed in the Pacific Northwest. There was a very awesome mural at the Silver Moon Brewery, though. A tribute to musical artists that covered the side of an entire building.

I don't drink beer, but Kevin found some samples to try at Boneyard Brewery, Deschutes Brewery and Kobold Brewing. A few of the breweries had hard cider, so I was able to sample some of those. 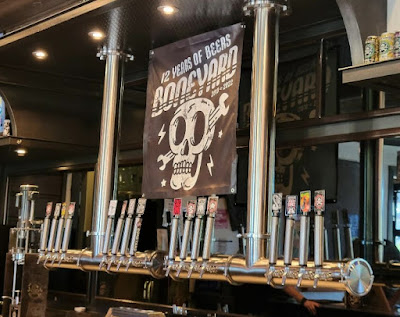 The next day we checked out some breweries in Redmond, Oregon. There was also a Joann Fabrics in Redmond, so I was able to stock up on a few quilting items. The breweries were Initiative Brewery and Wild Ride Brewery.
When we left Yuma on July, 5th it was over 100 degrees. Most of the time as we traveled through California and Oregon, it was just as hot. The only relief was the few days we spent in the national parks which were at higher elevations. As we left central Oregon and headed to the coast, we were looking forward to some cooler temperatures. The 200 miles drive was along some really beautiful wilderness area with so many pine forests. We saw lots of logging trucks. 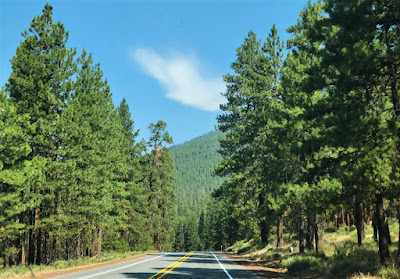 Don’t wish upon a star – Reach for one!
Posted by RV Khronicles of Kevelyn at 11:10 AM