We're staying in Garibaldi for a month to enjoy the cooler weather on the coast, and to do some crabbing and sightseeing. We had our first crabbing experience last week. Our friends Brad and Martha have been so generous in sharing their equipment and knowledge with us.

We went to the crabbing pier and used their three crab pots to see if we would have any luck. We used chicken legs for bait, zip tieing them to the trap so the crabs don't just steal it all.

Here's Kevin throwing out one of the pots. Be careful you don't get your legs caught up in the ropes! 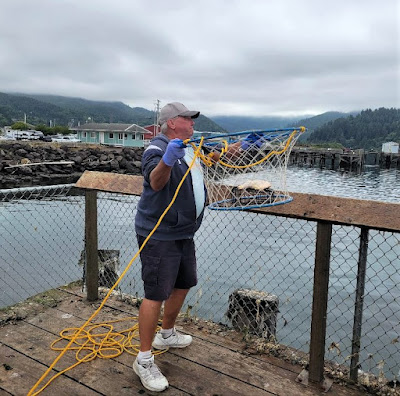 Hey, there are crabs in there. How cool is that!! It looks like serious business from the looks on our faces. Ha, ha!
To keep the crabs, they have to be male and at least 5-3/4 inches in width across the top of the shell. We got one!! Those pinchers hurt if they get you! Gloves are necessary. 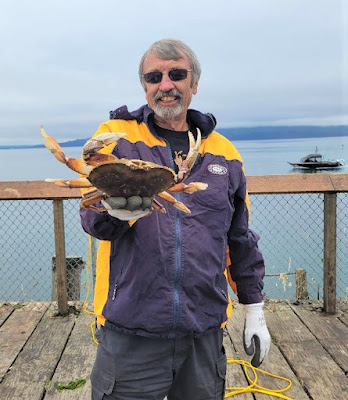 We ended up with three keepers after about two hours of work. Lots of them were either female or too small so they got thrown back. Brad and Martha have the cooking equipment. Brad likes to cook them whole. 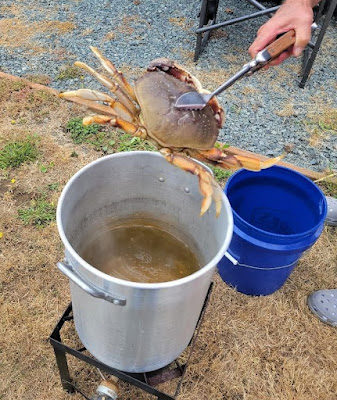 Other people pull the legs off and just cook those. There was enough meat in the three crabs to feed the four of us. So good!!
The next day some of the others in our group rented a boat and went crabbing further out in the bay. They got 31 crabs. We worked together cooking and cleaning them and had quite a feast that night! 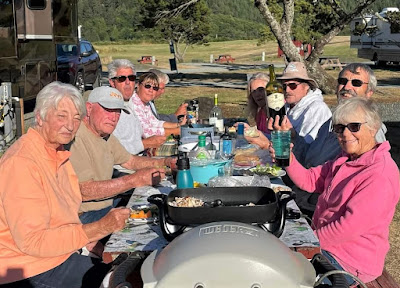 Garibaldi is a small coastal port town. There is a large marina with a number of commercial and amateur fishermen. This smokestack has been here since 1927. It was built by a large lumber mill and stands about 200 feet tall. It is one of the tallest structures on the Oregon Coast.

There are many barn quilts at locations up and down the coast. I thought this one at our RV park is a great representation of the area. 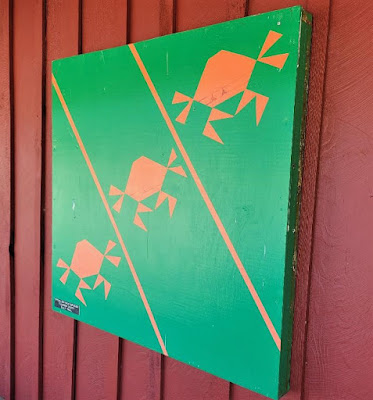 The town of Tillamook is just 15 minutes south of us. We went to the farmer's market last Saturday and then stopped at the Tillamook Creamery for a self-guided tour, some cheese shopping and ice cream. The tour is self-guided with windows and information to explain how the cheese is made. The employees must feel like they're in a fish bowl. 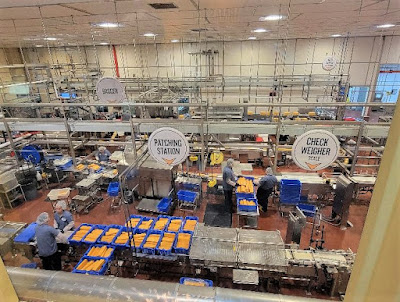 We bought some cheese curds and also received samples of three flavors of their cheese. It was good, but we like our Wisconsin cheese better. Probably just what you're used to. The Tillamook cheese seemed drier and sharper in flavor than the cheese from Wisconsin.

The building is beautifully designed. This is the side facing Route 101, the main road through town. 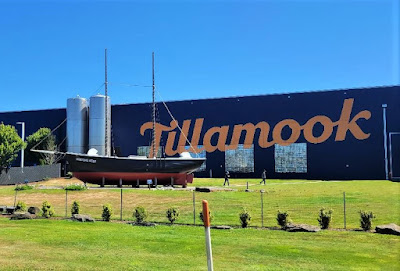 Above the main entrance door is this mural of Flower, the award-winning show cow of the creamery.
The ice cream was delicious. You could purchase a flight with three flavors. Kevin likes to try flights of beer at the breweries we visit. This is the first time I've seen a flight of ice cream. Now that's my kind of flight. There were about 20 flavors to choose from. My favorite was mudslide. It was so yummy, I totally forgot about taking a picture!

Yesterday we went to Cape Meares State Park. The lighthouse there is the shortest on the Oregon Coast standing only 38 feet tall. That's because it is on a cliff that is 217 feet above the ocean. You can imagine the struggle they had building it in 1890. 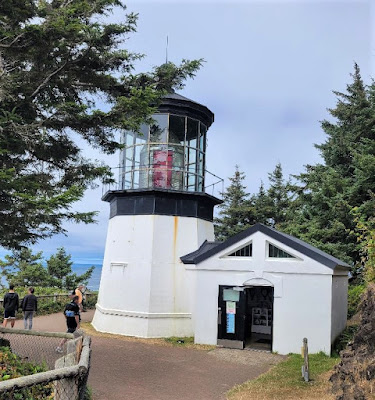 Although it was a bit overcast, the views were spectacular. We've found that near the water, there is almost always a marine layer of fog. If you click on the picture below, you can see the rocks in the ocean have arches in them. 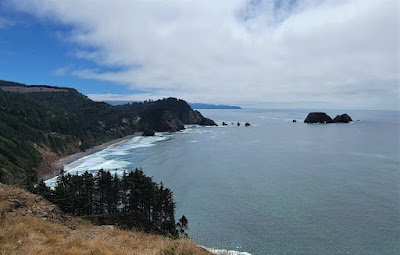 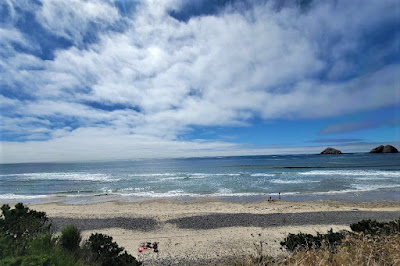 Also, in the park is the Octopus Tree, a 105 foot tall Sitka spruce. No one really knows how it grew this way, but what an unusual tree. It is 46 feet in circumference, and is estimated to be 250 to 300 years old. 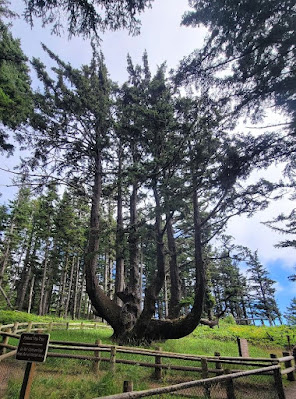 Another short trail in the park takes you to Big Spruce, the largest Sitka Spruce in Oregon. It is 144 feet tall, 48 feet in circumference, and about 750 to 800 years old. 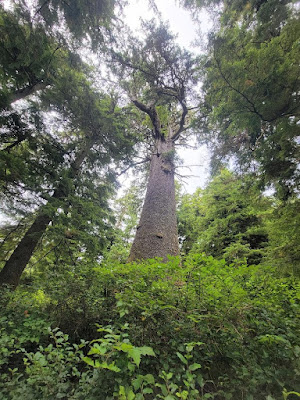 Here's an example of the fog rolling in off the coast towards the campground in the late afternoon. If it is sunny, the fog usually comes back later in the day. 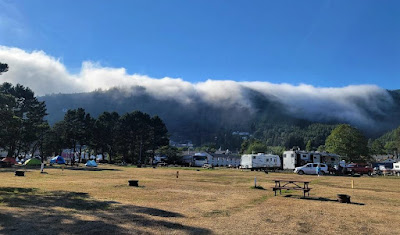 Last week, five of us went golfing. Martha and I were a twosome as the three guys played together. It was a scenic, challenging, nine hole course. We had a great time on a beautiful day. 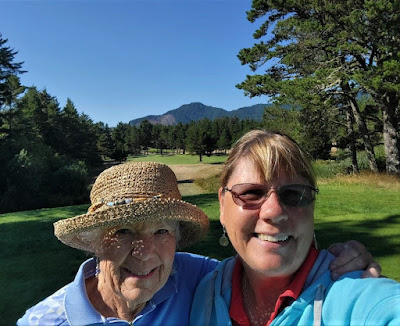 The campground is on the bay. Here is the view on one side. 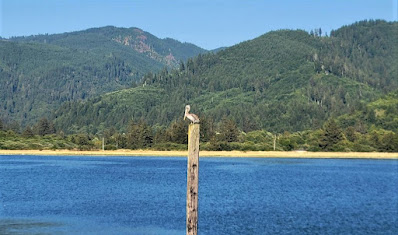 Today we are going to try crabbing again. We'll see if we have crab for dinner or hot dogs. You never know!