We're Once Again Living in a Construction Zone!

Work has begun on our new Arizona Room addition. We had a smaller version of a room which used to be part of the screened porch that went down the side of our park model. Before we purchased it, someone had enclosed part of the porch to make it into a room, but it was only 8 feet wide by 19 feet long. A very odd size to place furniture in. It also had the original metal roof from the porch with a drop down ceiling under it. So, it was narrow with a low ceiling. Even with air conditioning to the room, it was always quite a bit warmer in there due to the metal roof above.

Once we had contractors come out and give us bids, we found out that none of it had been done to code. The original room would have to be removed and a new room built onto the side of the park model. We decided to bite the bullet and have it done. This is our home now for most of the year. It will be so much nicer with a bigger room and higher ceiling.

All of this work is now being done to code. There are several footings. The wall and floor joists are metal to prevent termite damage and for earthquake stability. We were told that if there is an earthquake, this will be the safest place to be. Yuma is in an earthquake zone, but rarely has more than a mild tremor.

We continue to play golf in the mornings. The temperatures are now getting into the high 90s in the afternoon, so golf must be played early. Two weeks ago, we went to Mesa Del Sol Golf Course with friends Terry and Gina. They had never played there and wanted to try it out.

Our friends Art and Dawn from Wisconsin came to visit for a few days in their new motorhome. It's a beauty. We played some golf, watched some Wisconsin sports and did a little sightseeing.

Another day we watched the Bucks game on their outside TV while playing bean bag toss.
We visited downtown Yuma including a beverage at the Prison Hill Brewing Company and dinner at Da Boyz Italian Restaurant. We had a great time visiting with Art and Dawn and hope they come back to Yuma again some time. 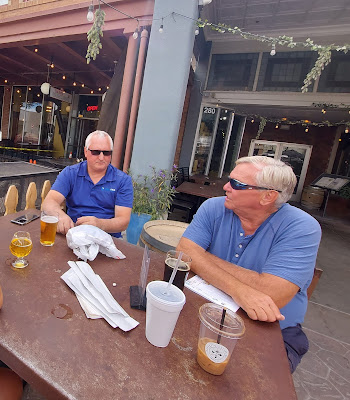 The cactus bloom in April. This is one of the cactus we have in our backyard. The blooms are so pretty, but they only last a few days. 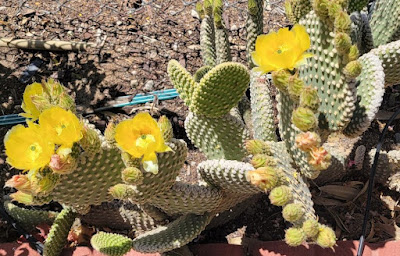 Before Cynthia left to go back to Nova Scotia, she hosted a craft session at her place. We made these very cool frames using sea glass, shells, beads, glitter and glass shards. Once we had our design laid out, we poured epoxy over it to make beautiful works of art. They look so pretty hanging in the window. Thanks Cynthia!!

We leave Yuma on July 5th. We've been assured our construction project will be done before we leave. Time will tell.
Don’t wish upon a star – Reach for one!
Posted by RV Khronicles of Kevelyn at 6:28 PM