Kevin had a great idea a few months ago. He suggested we go to San Diego for a two day mini vacation to take in a Milwaukee Brewers/San Diego Padres baseball game.

We checked it out and decided to go to the day game on Wednesday. We left Yuma Tuesday morning, and made the three hour drive to Ocean Beach. I've been missing some beach time. Too bad it was cloudy that day. Temperatures were in the low 60s. That's about 40 degrees cooler than Yuma. I needed to wear a sweatshirt.

It was still nice walking along the beach. We walked out on the Ocean Beach Municipal Pier which was built in 1966. It's the longest concrete pier on the west coast, extending 1,970 feet. It is one of the most visited landmarks in San Diego with half a million visitors a year. You can see the pier behind us. 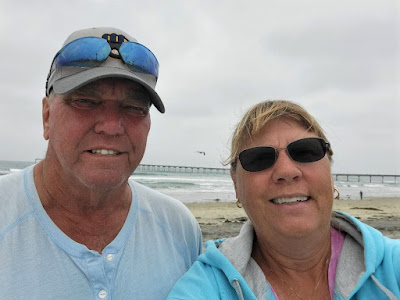 A fishing license is not required on the pier, so we saw quite a few people fishing, which attracted plenty of seagulls. This guy was kind enough to pose for me. 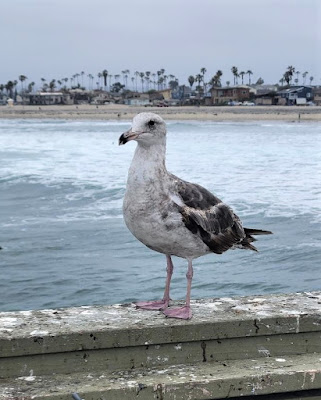 There were several surfers out in the water. They were wearing wetsuits, but it had to be cold!! 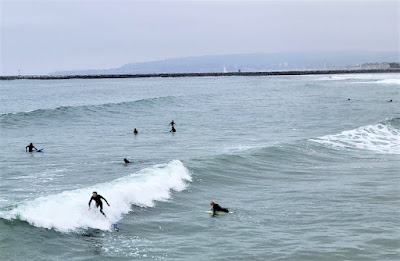 Here are some photos looking back at the beach. I wonder how long before those houses slide down the cliff?? 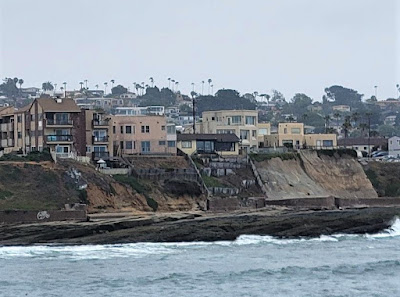 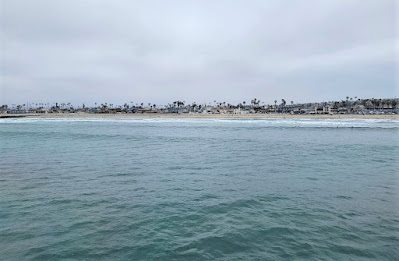 At one end of the beach was a dog park. It sure looked like the pooches were having a great time in the water. 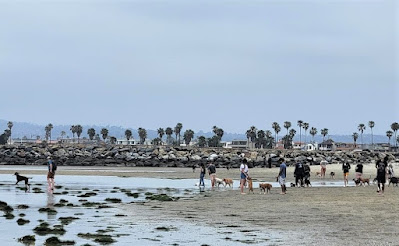 We spent a few hours walking and exploring and then headed to our hotel to check in. It was the Ramada Airport which is located across the street from the Point Loma Marina. We had a harbor view room with a balcony. Here was the view from the balcony. Downtown San Diego is in the background near the middle. On the left are airplane hangers from the Naval Base. You can enlarge any of the pictures by clicking on them.

We walked across the road and wandered around the waterfront. There are several restaurants and lots of boat businesses. We looked at brochures for yachts, but decided maybe not :)  More in our price range was sampling some beers at the Eppig Brewery Biergarten. Kevin got a flight and we sat outside and enjoyed the view. 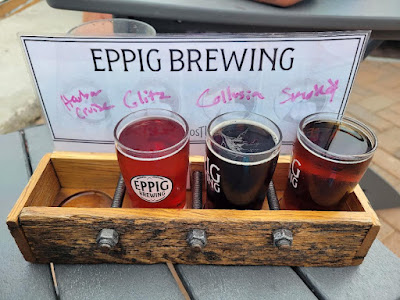 Next we had dinner at Point Loma Seafood. Thanks Caron for the recommendation. We both had the combo plate with fish, shrimp, crab cake, Cole slaw and fries. Yummy!

In the morning the skies were clear, and I was able to see this beautiful sunrise from the balcony. It was 58 degrees at 6 am. 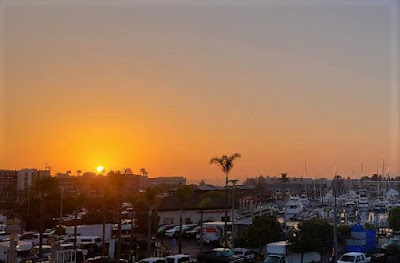 There was quite a bit of activity on the dock across from us. A few boats were coming in, and they began unloading carts of fish. There were some huge fish coming off those boats. The biggest ones were weighed on a hanging scale, and guys were getting their picture taken with them. I'm guessing they were at least six feet long. We later learned that these were multi-day charters coming back with their haul. 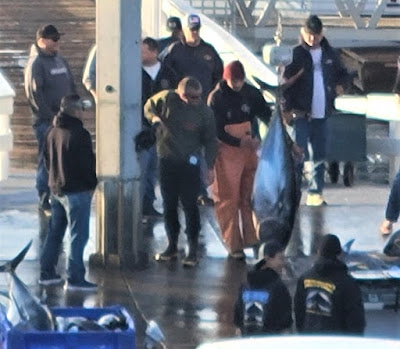 We went back across the street and walked along the waterfront in the opposite direction of the day before. There are so many boats parked here. All different types and sizes. From beautiful big yachts to all kinds of sail boats. I'm guessing it's an expensive hobby. The dingy parking area was full. Seems when you have such a big boat, you need a dingy to get back and forth. 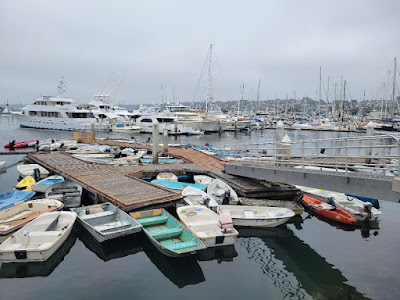 On the way to Petco Park for the game, we drove through Balboa Park. In 1868 city leaders set aside 1400 acres of land and named it City Park. Nothing much was done with the land until Kate Sessions arrived in 1892. She was a teacher with a passion for gardening. She offered to plant 100 trees a year in the park in exchange for 32 acres of land within the park to be used as a commercial nursery. She planted trees all around San Diego and is known as the Mother of Balboa Park. There is a statue in her honor near one of the entrances. 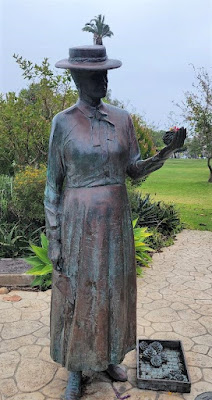 Many of her original trees are still alive today. One of the species of trees she introduced and planted was the jacaranda trees. There are estimated to be over 12,000 of them along the city streets. We were lucky to be there while their gorgeous purple flowers were blooming. 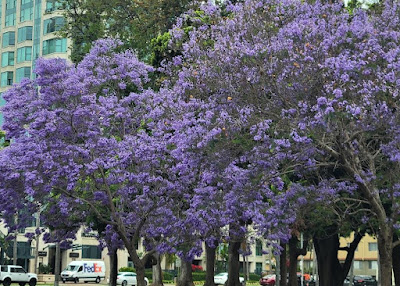 There is a desert garden and rose garden in the park. This sure is a huge cactus. 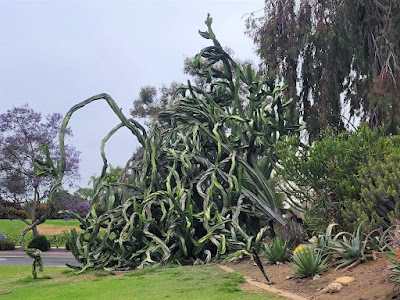 The roses were beautiful. Here is a sample. Too bad the sun wasn't shining. 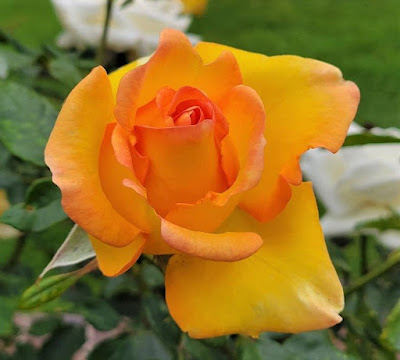 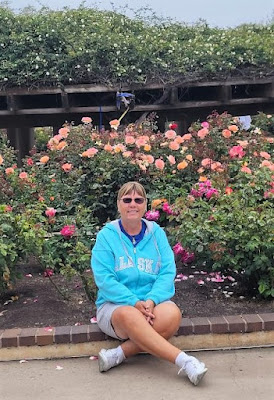 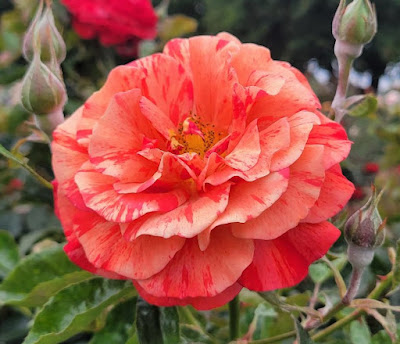 Petco Park stadium is in downtown San Diego. We purchased a parking pass online with our tickets for $25. It was in a parking garage a few blocks from the stadium. The sign at the entrance said they were charging $50 for parking the day of the game. Crazy. We got tickets in the upper section and they were only $22. I'm thinking if you lived here, you would take a bus or shuttle to the game. We love our stadium in Wisconsin where there are plenty of parking lots and you can tailgate outside before the games. 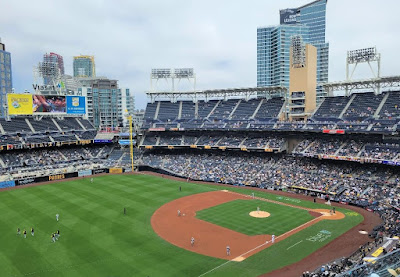 There was a statue of Trevor Hoffman on the grounds. He was a closing pitcher for the Padres for 15 years. I knew of him as he spent the last two years of his career with the Milwaukee Brewers. He recorded his 600th career save as a Brewer. He was exciting to watch. The song that was played as he came to the mound was Hells Bells by AC/DC and the crowd was always on their feet when he came out! 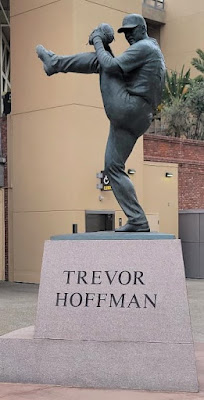 The San Diego airport is also near downtown. It was rather disconcerting to see the planes flying so close to the buildings. See the plane between the buildings in the center of the photo. Click to enlarge. 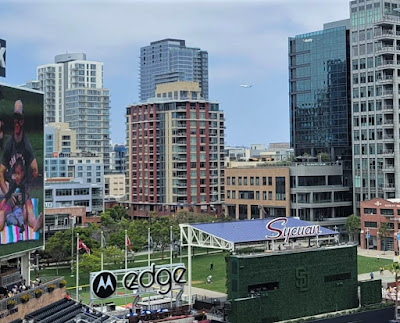 The game was exciting and the Brewers won. The sun came out in the early afternoon. A perfect day! 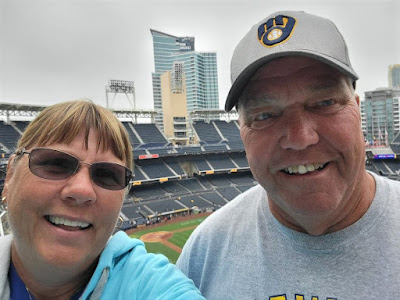 Our Arizona room construction is moving right along. Last week the windows were installed, the roof was put on and the insulation was put in. The drywallers are supposed to come this week. It's amazing how much bigger it seems.

Here's a reminder of what it looked like from the back before construction. 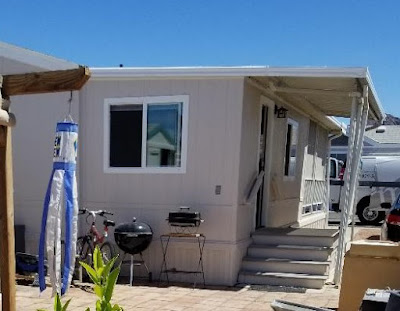 A group of us continue to play a golf scramble on Fridays. We're down to about 15 people now. We were playing at noon and having lunch together afterwards. It's now too hot for that, so this week we played at 8 am with doughnuts, mimosas and Bloody Mary's before we started. It was still quite hot by the time we finished, so next week we're starting at 7 am with no food or drinks beforehand.

Last Saturday I was invited to go kayaking with some friends. Kevin wasn't interested, and Joe was out of town, so Lorna and I were partners. Part of the route is through a narrow section. Lorna was working hard to steer us through there. I did my best pushing us along. We started on Squaw Lake, paddled through the narrows to the Colorado River, floated along the river for a while, and then ended back at Squaw Lake. Such a great time!!! 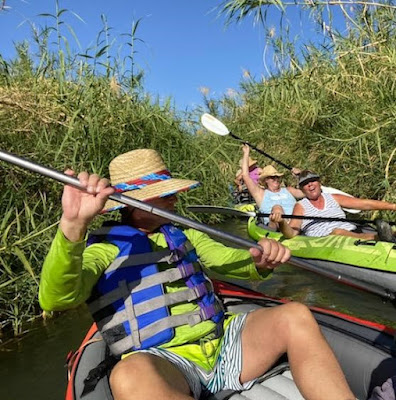 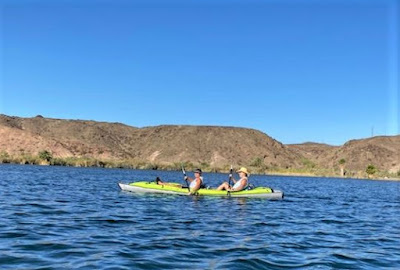 On May 15th there was an eclipse of the moon. It was called a blood moon because it looked quite red during the eclipse. My pictures don't do it justice. It was amazing!! 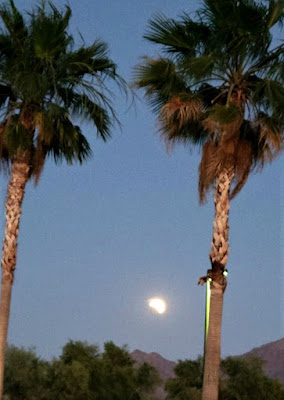 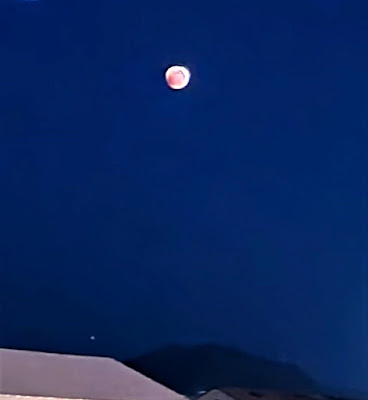 So, that's about it for now. We expect our construction will be completed within the next few weeks. It will be nice to be back to normal. We leave Yuma for our summer adventure on July 5th.