We left California and headed to Minden, Nevada to see Lake Tahoe. It was a beautiful, scenic drive, but not so fun for Kevin. Lots of narrow, winding roads with drop offs. He has had a lot of that type of driving on this trip. Thank goodness for our Garmin RV GPS. She helps us find the best routes for towing.

The main reason I wanted to stop here was to see Lake Tahoe. I didn't realize that Minden was on the other side of a mountain about 30 miles away. We stayed for five nights, but only the first day was decent. It rained and was cold all the other days. Oh well, we've had pretty decent weather all summer; so can't complain.

We drove to Lake Tahoe on Sunday as this would be the only rain free day. Unfortunately, a lot of other people were also there making it difficult to find a place to stop and see the lake or take pictures. We started on the Nevada side and headed north. This was the first spot we could get a view. It was cloudy, so the water colors were not as nice as pictures I've seen. It was also very windy, so the lake was quite choppy. 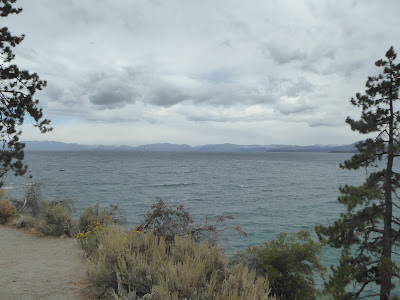 The lake level was very low. In the picture below, you can see the piers sticking way up out of the water. All boats were anchored out in the lake, quite a ways from shore. If you click on the picture, you can see lots of boats out there. 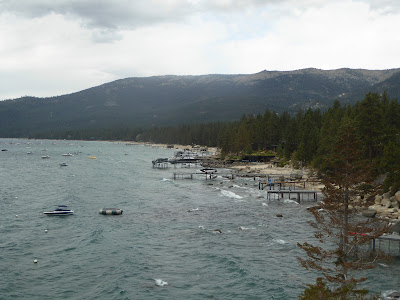 We continued our tour along the west side of the lake which is in California. That side was much more built up with lots of expensive homes and not any places to park and see the lake. As we came around the south end, we climbed to a higher elevation. There were some pull out spots, but there were no parking spots in any of them. The sun had come out, so we were able to see the beautiful colors in Emerald Bay. 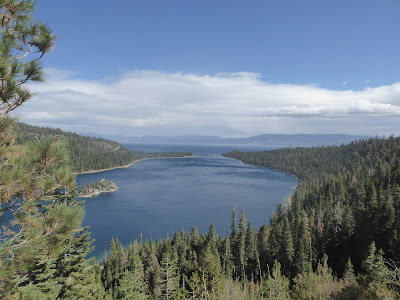 The west side of the Lake in Nevada is mostly natural with State Parks and Forests. Here are some views from that side. 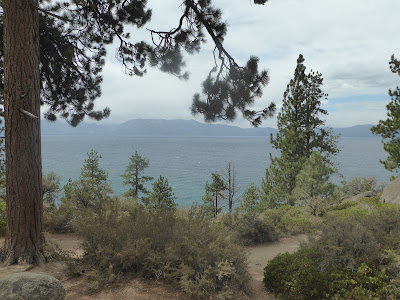 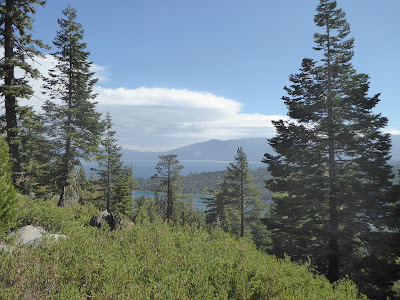 The Nevada/California border runs right through the town of South Lake Tahoe. You can certainly tell where the border is as there were several casinos as soon as we entered Nevada.

On one of the less rainy days, we headed to Carson City, the capital of Nevada. The State Capital building is being renovated, and was totally surrounded in scaffolding.  It originally opened in 1871, so some updates were probably in order. It is the second oldest state capital building west of the Mississippi. 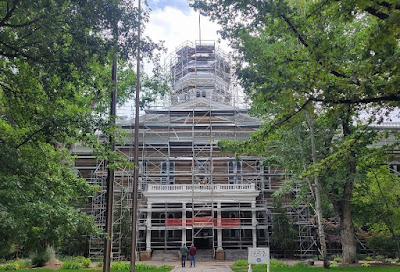 Here's what it is supposed to look like based on a model inside. 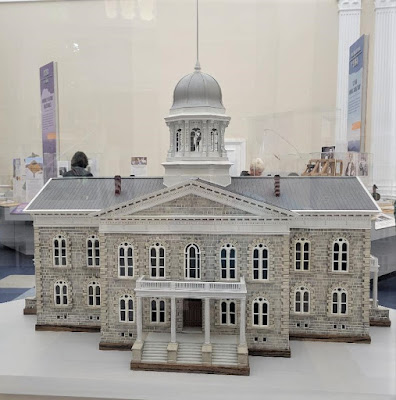 Some government offices are still in use, but many surrounding buildings have been built to house other state officials. There was a museum in one of the former chambers with lots of interesting information. 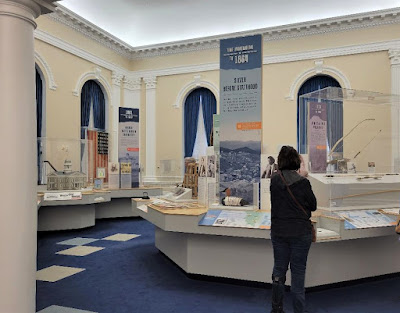 Nevada became a state on October 31, 1864, a few days before the election for Lincoln's second term in office. The papers to become a state got lost in the mail, so with just a few days to go, officials telegraphed all of the required documents. It was the most expensive telegraph ever sent. They made the deadline, and Nevada helped Lincoln win the election. Unfortunately, he only served a few months of that term before being assassinated.

This seal of Nevada in the museum was made entirely of very small beads. I'm guessing it was about 2 feet square. 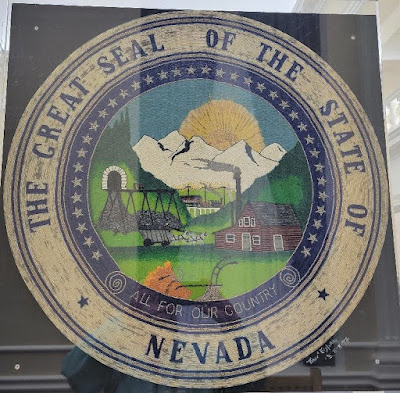 This chair was made of elk horns for Governor John Sparks who was in office from 1903-1908. Teddy Roosevelt sat in it when he visited in 1903. 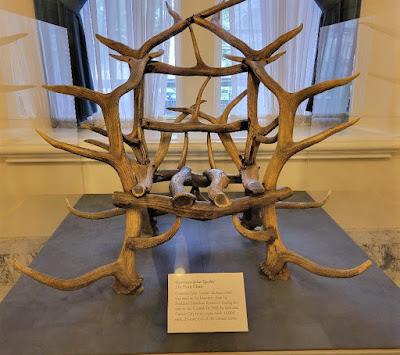 We walked along the downtown on Carson Street. We stopped in at the Nugget Casino, which is the oldest continuously operating casino in Carson City. It is still owned and operated by the descendants of the original owner. Unfortunately, the smoke smell was so awful, we walked right back out. I don't know how anyone can stand being in that smelly environment. 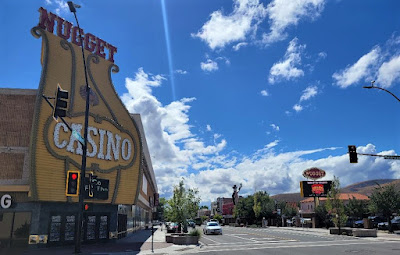 We also stopped at the Great Basin Brewing Company for some liquid refreshments. Kevin said the beers were quite tasty. On top of a hill on the outskirts of town, is a giant C and an American flag that measures 65 x 120 feet. It looks small from a distance, but it must be huge up close. 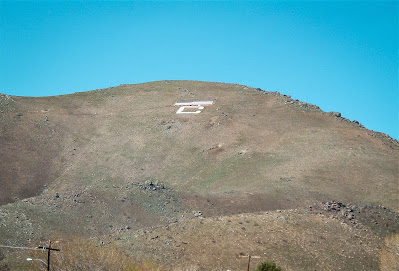 We stayed at Silver City RV Resort in Minden. It was a very nice park, although a bit pricey at $70 per night. They had a very nice clubhouse with this mural of Lake Tahoe. That's what I was hoping to see when we were there.

This old covered wagon was on the grounds. One of the original RVs! 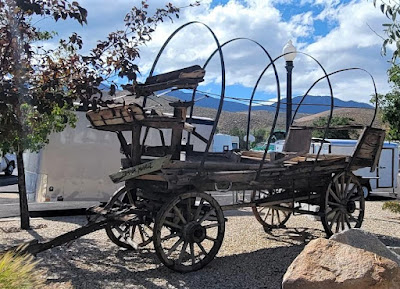 The views from the park were very beautiful with mountains all around. Late the last evening we were there, the sun came out and provided this awesome double rainbow. 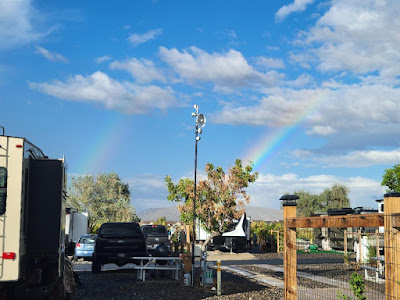 It was quite chilly our entire stay with highs in the low 60s and lows in the 40s. Our last night it got down to 35 degrees. Brrr!!!! We woke to sunny skies with snow on the tops of the highest mountains. It was 10 to 20 degrees below normal for our stay. 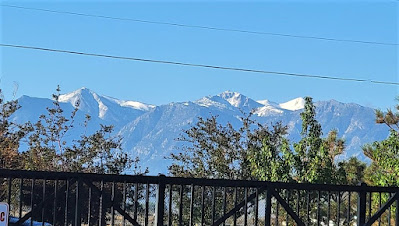 Our summer travels are coming to an end. We plan to be home on Saturday with a stop tonight in Tonopah, Nevada and tomorrow night in Kingman, Arizona. I'm looking forward to getting home and seeing our home remodel completed. When we left they still had to paint the outside and put up the back landing cover.