Because of many activities being downsized, we've been playing more golf this season than ever before. It must be paying off because both of our games have improved.

My handicap has dropped from a 19 to a 16 (for 9 holes), and I have had several games in the past few weeks with a score of 50 to 52. That's quite an improvement for me. Kevin has also been improving his scores, playing regularly in the 40s. Here I am concentrating very hard on making that putt. 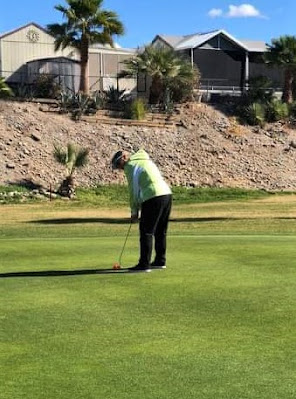 These are some of my golfing buddies. 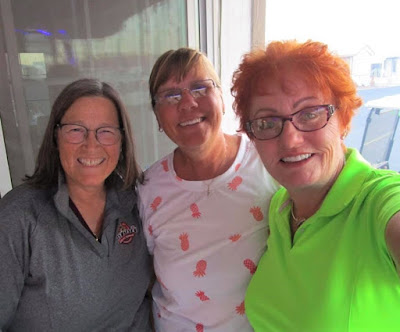 Since my last post, we have been enjoying life here at the resort. We rarely leave other than to grocery shop. At the end of January, they had a 5K walk/run here at the park. (A few people did actually run!) It was an overcast and blustery day, but we soldiered on. It even sprinkled for a little bit. Here are some of my walking friends. Kevin walked with a group of guys. We made it under an hour, and that was good enough for me. 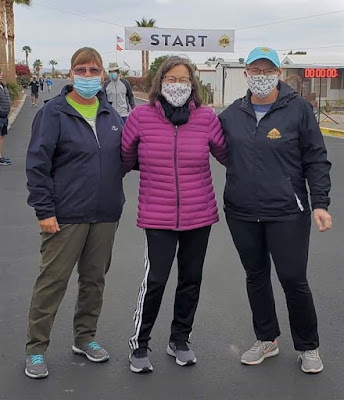 After the walk, there were snacks and beverages at the pool area. It's great to have such wonderful friends here. 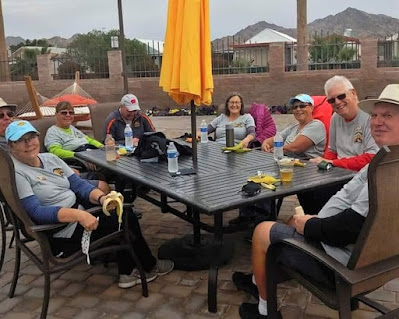 In February the resort sponsored a bike ride outside of the park. We trucked our bikes to downtown Yuma, and then rode about 9 miles on paved paths. At the end, we met at a park where the resort supplied a free bag lunch for all participants. Below our resort manager, Greg, is giving last minute instructions. 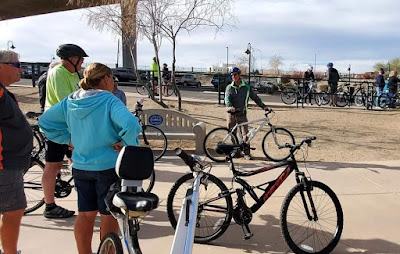 About 60 people participated. Not bad for a year where the resort is only about half full. 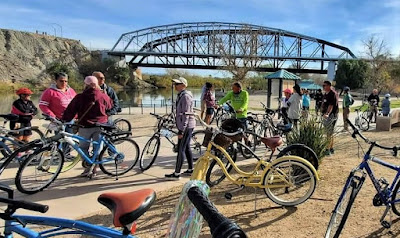 One of the work campers has the job of taking pictures of all the events and posting them on Facebook. She got a nice picture of us. 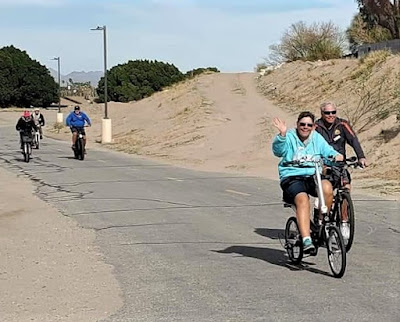 The Activities Department employees handed out delicious turkey or ham sandwiches, chips, fruit and beer, water or soda in little cooler bags we got to keep. 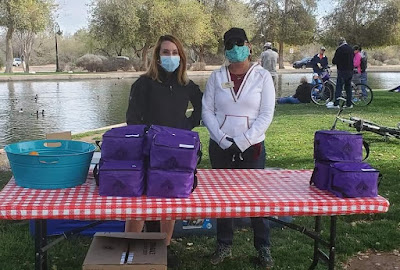 February 26th brought us a full moon. The timing was perfect to get some amazing pictures as it came up over the foothills. 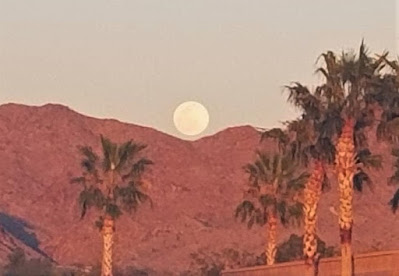 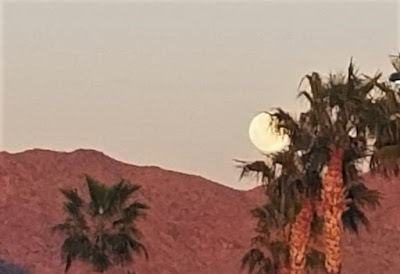 One morning Kevin came in and told me to come look at what was out on the patio. Sitting on top of our flag pole was a very unusual bird. At first we thought it was some type of hawk; but when it turned it's head pretty much completely around, we knew it was an owl. That's the first time we've seen an owl here. I tried to identify what type it was, but couldn't come up with the answer. If anyone can identify it, please let me know. 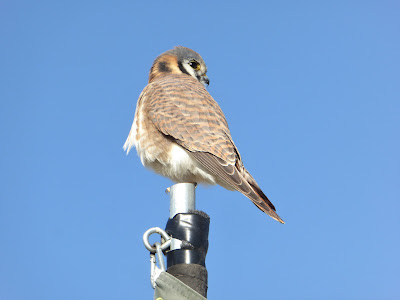 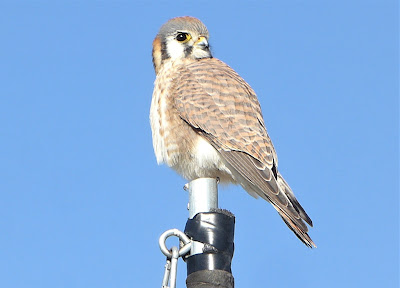 We continue to get together with our New Kids on the Block friends for our weekly Friday night potluck. There is so much fun and laughter. It's so good for the soul!!! 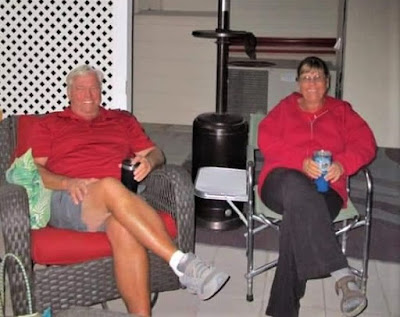 In February we also participated in the annual night golf tournament. You are paired with another couple and play 9 holes in the afternoon. This year we had a take out supper of a hot dog, cup of chili, chips and a beer or soda.
Then we played another 9 hole round of night golf in the dark. Everyone decorates their carts with glow in the dark balloons and other glow sticks. You are not allowed to turn on your lights. The holes are shortened into par 3 for the night round. There are glow stick lights to lead you to each hole and down the fairway. The flag has glow sticks on it, too.
This is the third time we've done it. It's an amazing event that we really enjoy! And, we finished in 4th place. 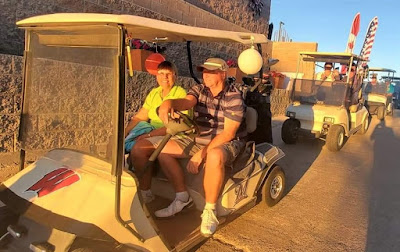 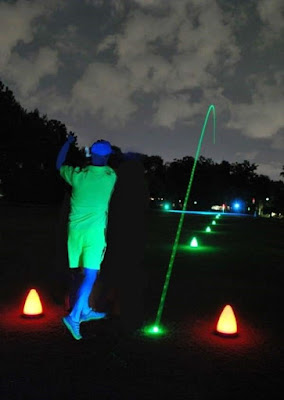 I don't know who the guy is in the above photo. It was someone who was at the event that night. I stole the picture from one of my Facebook friends because I thought it was such a cool looking picture!

Last Friday I was out running errands. I saw these two unique rigs in the parking lots. That's the smallest camper I've ever seen. It has 2 solar panels on top, and 2 propane bottles on the rear. 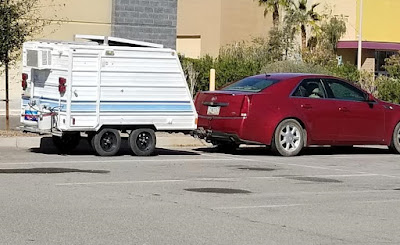 We've seen a lot of unusual towing configurations in our travels. But, this is a new one. I've never seen a boat loaded on a pickup truck like this. I saw that they have a hitch on the back of the truck, so my guess is they also tow a pull behind camper. 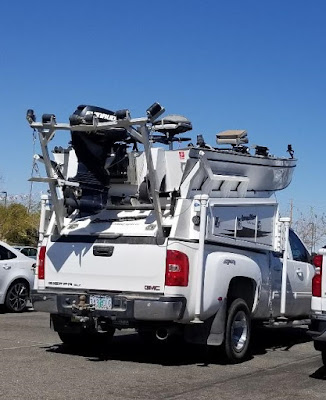 So, as you can see we've been plenty busy, and enjoying our life here in Yuma. Covid cases are very low in Yuma County as well as at our resort. I haven't heard of anyone in the park being sick in quite a while. Kevin got his first vaccine last week. I get my first one on Tuesday as Arizona has now opened it up to those 55 and over. We look forward to life returning to some normalcy soon.