Well, I believe this was a first. It's not too often we go bar hopping with one of our kids.

In the past few years as we traveled west along Hwy. 151 in Wisconsin, we kept seeing billboards for The Grumpy Troll Brew Pub in Mount Horeb, Wisconsin. On my way back from Nebraska a few weeks ago, I also noticed a sign for Wisconsin Brewing Company in Verona, along the route to Mount Horeb.

So, this summer we decided on a day trip to explore both of these microbreweries. Eric was on vacation last week, so I invited him along. He arrived at our place on Thursday around noon, and we headed out. Mount Horeb is about an hour from our campground, and that was our first stop. 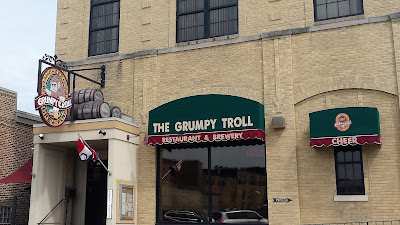 The Grumpy Troll is in a renovated old building. There was construction work being done on the side of the building. It looked like they were expanding their dining room. Kevin and Eric each had a flight of 5 beers. Each 4 ounce sample is $1.50. They both agreed that the beers were tasty. We also ordered deep fried white cheddar cheese curds and Grump chips, which were homemade potato chips. Both appetizers were good. 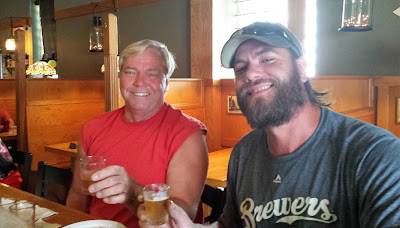 I had to laugh at one of the appetizer selections. It was an Uff Da pretzel served with a couple of different dipping sauces. Our daughter-in-law Cathryn is from Moorhead, Minnesota and is of Norwegian heritage. Once in a while she uses the phrase Uff Da, so this is for her :) 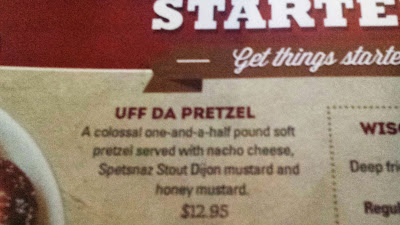 I'm not a beer drinker, but I ordered an apple hard cider brewed on site. It was okay, but didn't have enough apple flavor for my liking.

We had visited Mount Horeb several years ago, and I remembered lots of troll statues around the downtown area of town. Trolls are a big deal in this town. After leaving the pub, we drove around, but there weren't as many trolls as I remembered.

Our next stop was Wisconsin Brewing Company in Verona along our route back home. This is a newer microbrewery in an industrial park with just a tap room for tasting. No food is sold, but customers are welcome to bring in their own food. We saw two groups that had brought in their own food. 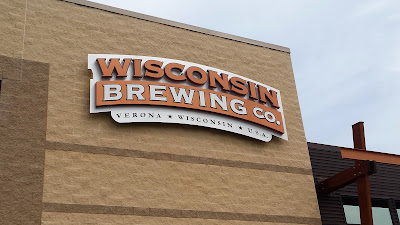 Again, Kevin and Eric sampled four beers served in a clever holder shaped like Wisconsin. They were made of wood and for sale in the gift shop for $55. 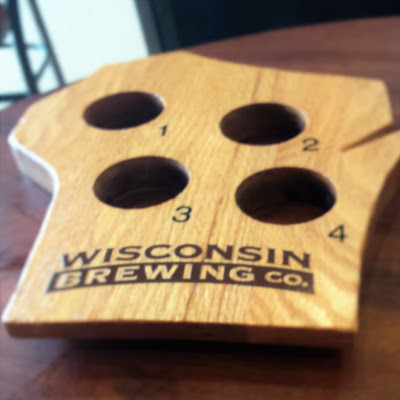 At this point, my phone battery died so no more pictures. The guys both enjoyed their beers, and then we headed back home. As we skirted Madison, there was once again construction traffic to deal with. In our six years of full time RVing, we have traveled around Madison every year, and there is always construction. What a pain!

Kevin cooked brats on the grill for supper at Eric's request. Eric spent the night, we had a nice breakfast the next morning, and he went back home to enjoy the rest of his week off of work.

On Sunday my family came for a picnic. It was another warm and humid day. There have been so many humid days this summer. I'm looking forward to some crisp, fall days. The flies and bees were quite pesky, but we still had a good time.

This weekend is Labor Day Weekend, and the campground will be full. Three of the sites will be occupied by friends of ours. We're looking forward to a fun weekend with these long time friends.

Don’t wish upon a star – Reach for one!
Posted by RV Khronicles of Kevelyn at 7:19 AM