On Wednesday we explored Lake Pleasant Regional Park, which is advertised as being 30 minutes north of the Phoenix Metropolitan area. From where we are in Buckeye, it was about an hour drive. Once we got out of the city, it was a scenic drive. I was surprised at how many Saguaro cacti were north of Phoenix. It reminded me a lot of the Tucson area.

Our first hike was about a mile of Pipeline Canyon trail. We hiked downhill to a floating bridge where we were able to see how clear the lake water is. There were quite a few beautiful orange and yellow wildflowers growing along the trail. 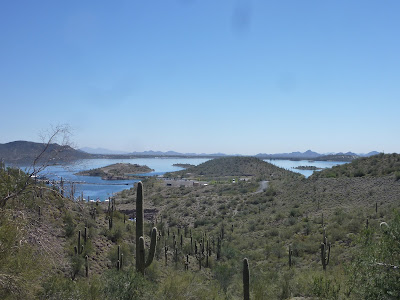 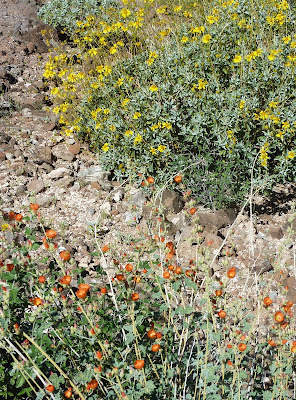 The lake and park are huge, covering over 23,600 acres. There are three campgrounds and a huge marina. There was even a heliport. I'm guessing it is for emergency purposes as the park is rather remote, and it could take rescue crews quite a while to reach an injured person. 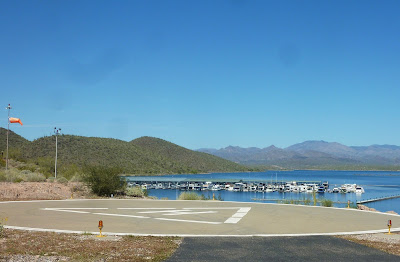 Our second hike was on the north end of the park called Yavapai Point. It was about four miles round trip with an elevation gain of 400 feet. The first two-thirds was a very gradual climb, but the last one-third was steeper with switchbacks. Very doable, but take your time and drink plenty of water.

On the way up we saw this very tall cactus with interesting arms. While I was taking pictures of it, I heard a noise under the tree just behind it. 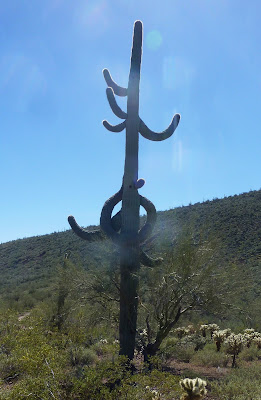 It turned out to be a wild burro. I had asked at the entrance station if there was any chance of seeing the wild burros, and the guy didn't seem very positive about it. So, quite a bonus to see this guy. 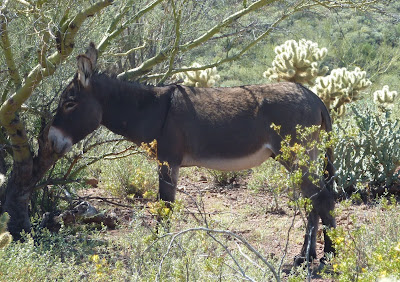 He kept moving his head up and down. I think he was scratching himself on the branches. I walked a little closer and zoomed in. He didn't seem bothered by us, but I wasn't getting too close to a wild animal.

This cactus had a such a pretty flower growing from it. 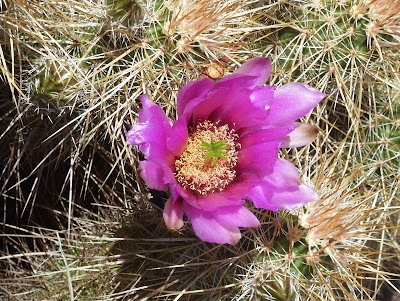 The view at the top of the trail was amazing. Gorgeous scenery including the lake, surrounding mountains and desert. 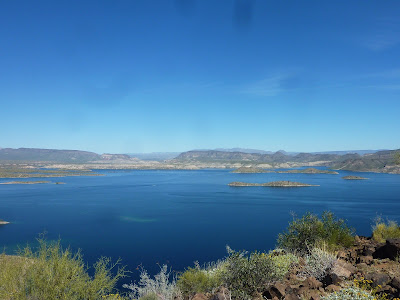 The Pipeline Canyon Trail actually intersects with this trail, and we could see where we had hiked earlier. You can see the floating bridge we hiked down to. The big round water tower at the top left is where the parking lot was. We could have hiked from the bridge to the Yavapai Point trail and back again, but I think that would have been too much. We would have had to be better prepared with more water and some lunch. 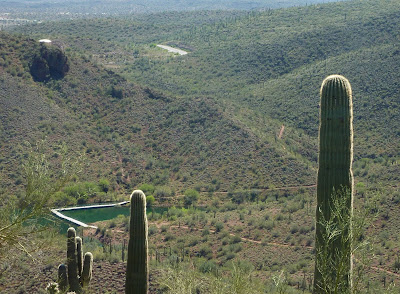 We got a nice view of a boon docking camping area right along the lake. 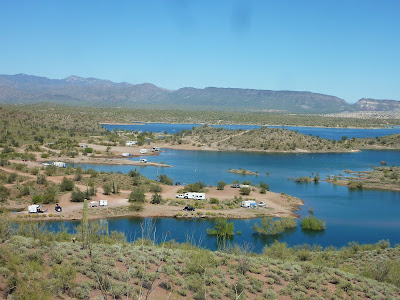 On our way back to the truck, I looked for the burro. He wasn't under the tree anymore, and then I heard him nicker. He was a little further up the trail on a hill right above us. I took several pictures, and again he didn't seem bothered by us, but I wouldn't have wanted to try getting any closer. 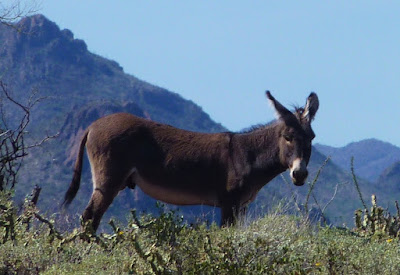 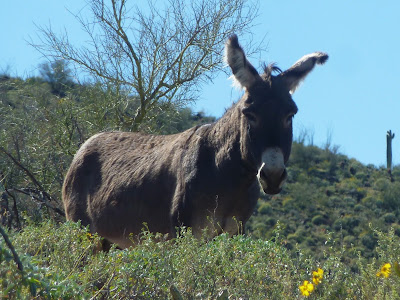 We really enjoyed our visit to Lake Pleasant. It's always surprising to find a lake in the middle of the desert. There weren't many people there when we visited, but there were several huge parking lots. I'm sure it is a very popular place in the summer.

Yesterday we went to another Brewers baseball game. They had been in a slump, losing all of their games since we had been there the previous Sunday. It was up and down all game, but they won. That makes us 3 and 0 for the games we've attended. Maybe they should hire us to attend all of their games.

Don’t wish upon a star – Reach for one!
Posted by RV Khronicles of Kevelyn at 7:58 PM