I can’t believe its been over two weeks since my last blog post. I guess time flies when you’re busy and having fun.

The campground continues to be very busy, and much of our time is taken up with our jobs and helping campers. Overall, it has been a good summer. Of course, there are always a few people that feel rules don’t apply to them. But, that’s part of the reason why we are here; to ensure everyone can enjoy their camping experience.

On August 1st our Quonset shelter was rented by the Wisconsin Falconers Association for their annual summer picnic meeting. I had never heard of this organization. It turns out there are national and international chapters. Their members enjoy owning, training and hunting with these raptors.

Some of the members brought birds with them and gave demonstrations. I didn’t realize hunting with these birds was such a big sport. These two are Harris’ hawks. 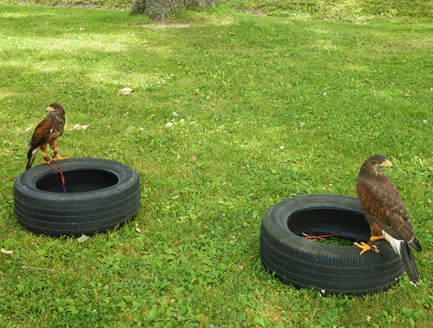 This one is a female red-tailed hawk. It was cool to see one of these birds up close. We’ve had a family of them living in the park the last two years, but they don’t let us get this close. What a beautiful bird. 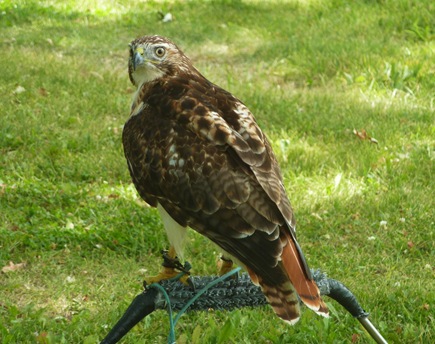 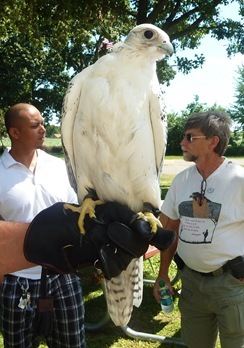 This one is a Gyrfalcon. At one point the handler had some type of headdress on it that made it look just like the bird that used to be on the show Falcon Crest that was on in the 1980s. Too bad I didn’t get a picture of that. Another amazing looking bird. I really enjoyed having this group in the park. They were kind enough to let me take pictures and answer my questions.

On August 2nd, we went to a Milwaukee Brewers baseball game with a group of friends. We enjoyed tailgating before the game and then went in to watch the game. It was the hottest day of the year with temps around 90 degrees. I saw several people being treated by EMTs for heat related problems. Luckily, our seats were in the shade for the most part, and there was a nice strong breeze all day.

The team has not been doing well at all this year. In fact, they traded away quite a few players to begin the rebuilding process. They lost the game, but we still had a good time with friends.

On August 4th, we went to another Brewers game with our son Eric. BP gas stations have a promotion each summer where you can earn free tickets with gas purchases. So, we had free tickets for this game.

Before the game we went to a new attraction at the stadium called The Selig Experience. It’s a video presentation of the life of Bud Selig who brought baseball back to Milwaukee after the Braves left in the 1960s. He was instrumental in getting Miller Park built to keep the Brewers in Milwaukee, and he was the commissioner of baseball for many years. It was a great presentation. 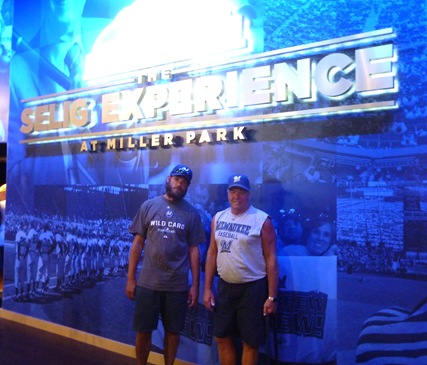 Bob Uecker has been a Brewers broadcaster for many years, and still announces games. Years ago he did some Miller beer commercials in which he was escorted to his seat at the very top of the stadium. Miller Park has some Uecker seats available for $1 at every game. 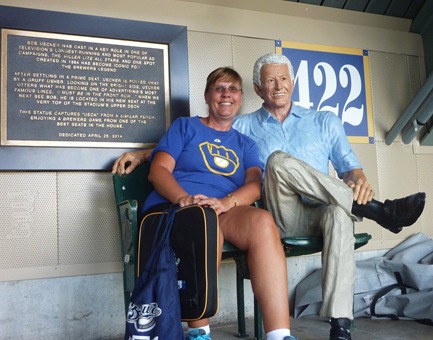 We had a great time with Eric and our team even won.

We’ve played some golf, enjoyed some nice summer weather, and are working. That’s about all there is. Can’t complain!