I’ve been following the blog of Kevin and Ruth for a few years now. They are a couple around our age from Canada who have been spending the last few winters in their motorhome in Mexico. They have also been to Africa and South Korea in the past two years. They read my blog too, and we occasionally leave comments for each other.

They were going to be near Yuma for a few days, so we made plans to get together for an in person meeting. It’s funny how small the RV blogging world is. We’ve met several fellow bloggers in the past. You feel like you already know these people, although you’ve never met them in person. You know about their families, their travels, their ups and downs, and their opinions. However, meeting in person is always a treat.

We enjoyed meeting Kevin and Ruth, and we commented on each other’s accents. When you only know people through reading their words, its nice to hear get to hear their voices.

An added treat was that two other blogger couples joined in this get together. Kevin and Ruth were kind enough to host this little gathering at their RV. They were set up at the Pilot Knob LTVA just across the Arizona border in California, about 20 miles west of where we are staying.

The two other couples were Ray and Cindy from Utah and Janos and Maggie from Canada. Although I had not been a reader of either of their blogs in the past, it turns out Cindy is a quilter and Ray does her quilting on a long arm machine. Janos and Maggie are originally from Europe. We all had much in common, and their was plenty to talk about for the two hours we visited. 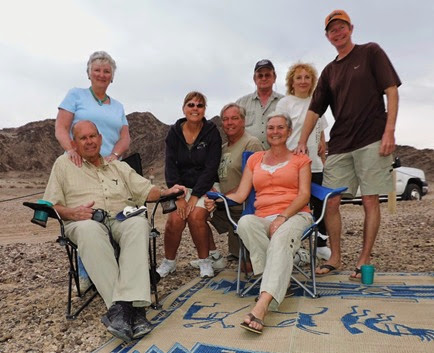 Ray and Cindy are on the left, then Kevin and myself, Janos and Maggie in the back, and Kevin and Ruth on the right. What a group of great people!!

Although, I’m not complaining, the weather this past week hasn’t been the greatest. We had rain on Monday all day and again on Thursday night. It’s been cloudy and a bit cool all week. Just not what you expect in southern Arizona. But don’t feel too bad for us, the sun is coming back today and next week will be in the 80s. Yippee!!!

We played pickle-ball with Bernie and Cathy again and will be golfing today. Tomorrow Dick and Wanda are coming over to watch the Super Bowl. Should be a good time even though our team isn’t in it.