This is our second visit to Biloxi. We came here for a 20th anniversary trip in 1997. Things have certainly changed since then.

Back then we stayed at the Grand Casino. Gambling came to Biloxi in the 1990s, but casinos were only allowed on the water. There were several huge casinos built on barges along the coast. You couldn’t even tell you were on water, that’s how big they were. Here’s a picture of a postcard I bought at the time. 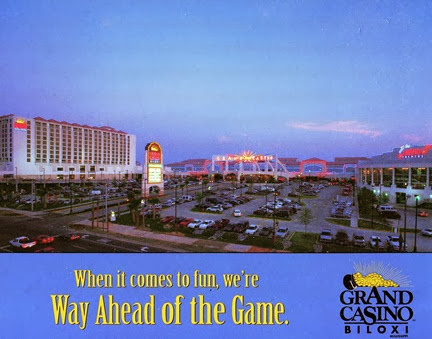 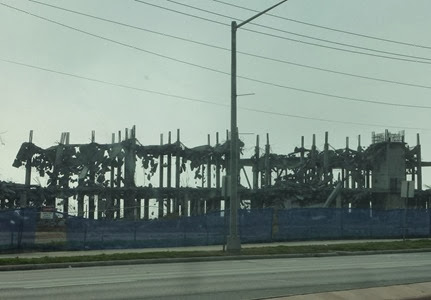 On August 29, 2005 Hurricane Katrina pretty much wiped out everything that was along the coast including the casinos. The Grand Casino has rebuilt, and is now across the road from this debris.

One thing that is very different between Biloxi and New Orleans is that there is no debris or boarded up buildings left in Biloxi. In fact, this debris from the casino is all that we’ve seen. They’re working on getting rid of it. Everything else is pretty much gone.

When we were here in 1997 the coast was lined with beautiful old mansions and estates. Almost all of them are gone. There are miles of vacant lots for sale. Some had prices listed between $500,000 and $600,000. No wonder no one is building on them. What a shame that all of those beautiful old homes are gone. All that remains are some retaining walls, foundations, sidewalks and landscaping. I don’t think this area will ever look the same. I have a feeling if any building gets done on those lots it will be stores or restaurants. How sad!

Biloxi has the only lighthouse that sits in the middle of a divided highway. It was built in 1848 and is made of brick lined cast iron. It’s survived over 20 hurricanes. It needed extensive restoration after Katrina, but it’s still standing. 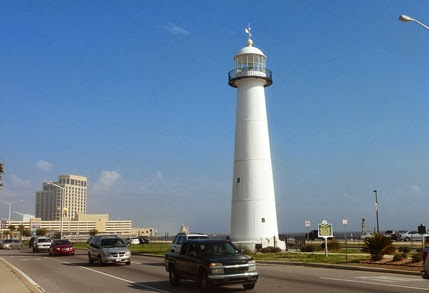 That’s the Beau Rivage Casino in the background. Twelve casinos have rebuilt in Biloxi since Katrina. A few of them are on the Gulf. Others are a little inland on a bay on the other side of the city. Mississippi changed its gambling laws about ten years ago so casinos no longer have to be on the water, but they still have to be within a certain amount of feet from the water. Weird laws.

The Beau Rivage is a beautiful casino. Here’s the fountain out front. There were pretty flowers planted all along the front. 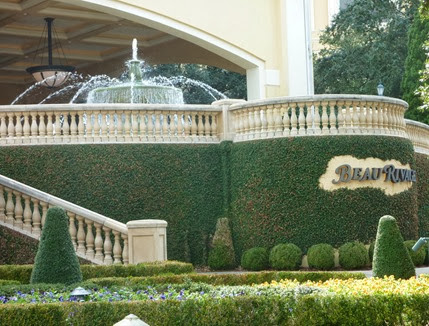 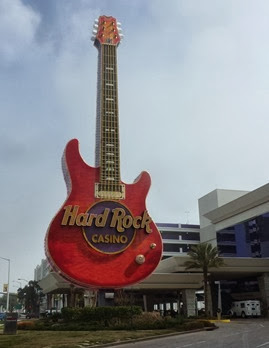 Next door is the Hard Rock Casino. We had a good time wandering around in a couple of the casinos. We’re not much into gambling, but it was fun looking around. I especially enjoyed some of the costumes on display inside Hard Rock. That’s sure a big guitar!! We continued our walk along Beach Blvd. in downtown Biloxi.

There is a Katrina memorial in the town square. It was built by the show Extreme Makeover: Home Edition in 2006. The granite wall is 12 feet tall and symbolized the height of the water level during the storm. The actual storm surge was 35 feet. The glass case contains items recovered after the hurricane and made into a sculpture. 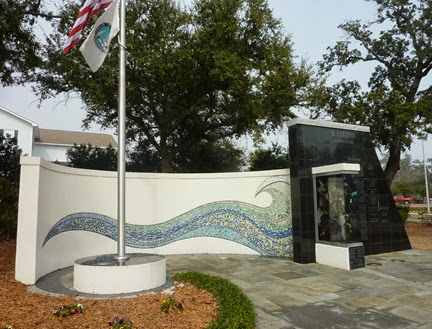 There is also an awesome tree sculpture next to the memorial. 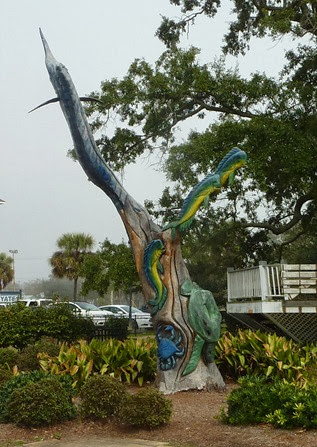 We walked around the marina and saw lots of shrimping boats. Notice the name of the red boat. Too funny! 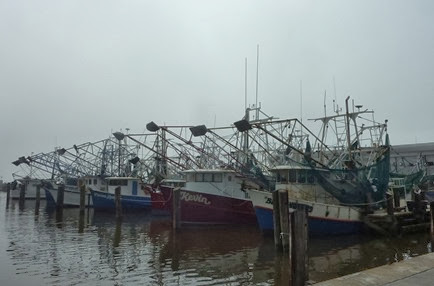 Biloxi has the nicest visitor center we’ve ever seen. It was rebuilt after Katrina to look like a historic home that had been here. They have a 45 minute movie about the hurricane. Hurricane Camille hit this area in 1969 and was the worst storm ever to hit the United States up until that time. In 2005 Hurricane Katrina was even worse demolishing over 6,000 buildings in Biloxi and killing hundreds of people. It’s been really sad seeing the devastation caused by the storm. 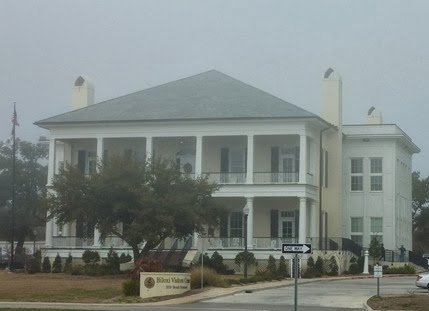 Some of the damaged trees along Beach Blvd. have been carved into statues just like we saw in Galveston. Here are just a couple of them. 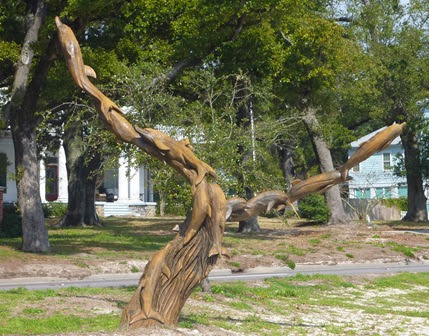 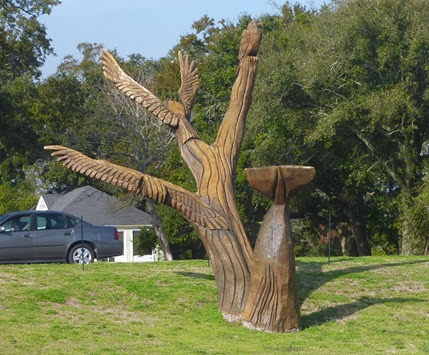 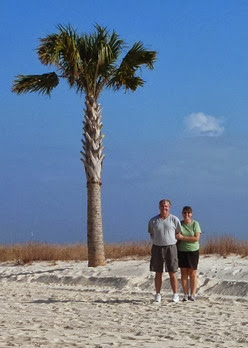 The first two days we were here it was very foggy along the coast as you can see in the visitor center picture above. The water temperature and the air temperature were close to each other creating the fog. Today the winds shifted, and we could actually see the water so we took a walk along the beautiful white sand beach. I love walking on the beach. It’s one of my favorite things to do. Temperatures have finally been warmer. Highs have been in the 60s and 70s since we’ve been here. Now that’s more like it!! 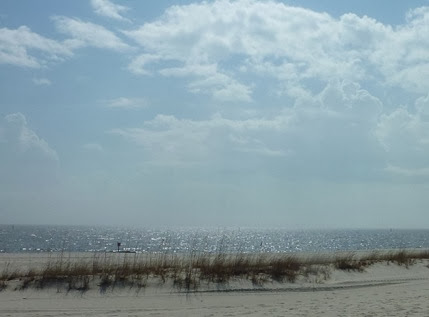