Considering we were overflowing with campers for the holiday weekend, all went well. Our 24 sites were mostly occupied by five groups of families and friends. We try hard to allow people to have a good time. But, sometimes we have to remind people of rules so that everyone is ensured of having a nice weekend.

Of course, there are always a few people who forget the rules apply to everyone. The rules at our park are that there is only one RV allowed per site with one extra tent allowed. The week prior to Memorial Day one of the groups called the main office explaining that one of their tenters had bought a pop-up and could they park it on a site with their parents who have a motorhome. They were told no, but kept calling and emailing until the office finally gave in and told them they would allow it this one time only as long as all wheels were on the paved part of the site. Our ground is extremely wet and there was no parking allowed on the grass.

They set up their pop-up in front of the motorhome and all was fine. On Saturday one of the others in this same group said they had permission for a tear drop trailer to come and set up on their site with their pop-up. We knew nothing about this, but since the office was closed we couldn’t check out their story. We allowed it. Of course, these extra units had to pay the full price for the second trailer on a site.

This same group had to be reminded to have their dog on a leash. They also took their large dog into the bathroom even though we have signs on the door stating no dogs allowed in the bathroom. Isn’t that just common sense???

On Monday morning I called the office to check on their story. As suspected, they did not have permission for the second extra unit. What is it with some people. You give them an inch and they take ten miles. They have now ruined it for everyone. Doubling up of trailers will absolutely be denied in the future.

Late Sunday afternoon a young couple on road bicycles came into the park. They were on a trek across the state from Milwaukee to the Mississippi River. We let them set up their tent in the overflow area next to the wood shed. That area is only supposed to be used for people who are road weary and need a place to sleep. I think these bikers definitely qualified.

Some friends of ours who were camping nearby came for a pot luck dinner on Sunday. We cooked out and then enjoyed some time around the campfire. Thanks Gordie for sending me this picture. Kevin managed to be hiding in the picture I took. 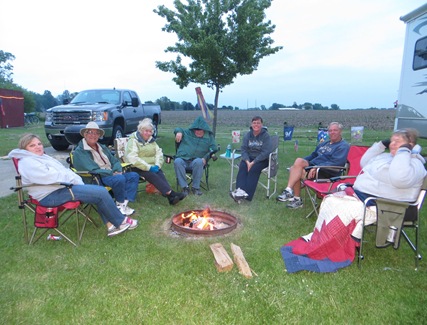 As you can see, we are all bundled up. The weather over the weekend was quite cool. We had a bit of rain, but mostly it stayed dry. Areas to the south of us had rain all weekend. I guess I’d rather have cool temperatures than rain.

Yesterday the warm and muggy weather returned with highs in the 80s. We went from running the heater one day and the air the next. There were some severe storms west of us during the evening hours. Several campers were overturned at a campground not too far away. Luckily for us the severe weather stayed away from our area.

Tomorrow I’m driving to Moorhead, Minnesota to attend a bridal shower for Cathryn, our future daughter-in-law. The wedding is just over two months away. I’m looking forward to meeting some of Cathryn’s relatives. I’m sure there will be lots of wedding talk all weekend :)