We’ve been off the grid without internet access since last Friday. I wrote this post on March 30th, and am finally able to post it today.

We arrived at Cleburne State Park on Friday afternoon after about a three hour drive. I’ve forgotten what a state park is like on a holiday weekend. We probably should have chosen a private park for the Easter weekend. There are lots of noisy children and dogs, people walking through our site and just general chaos.

Cedar Lake is located in this park. It’s a small lake with a beach. There are also quite a few campsites. We have a FHU 30 amp back in site. There are lots of trees so we could not get a satellite signal. Luckily, we got TV channels with the antenna as it is another March Madness weekend. Kevin would have been very unhappy if he couldn’t watch the games. We also can’t get any cell or mi-fi signals, so no internet. We rely a lot on technology, so we would not stay here again. We’re leaving Tuesday morning and will just have to deal with it. I admit I am a bit of an internet junkie :)

On Saturday we went to Dinosaur Valley State Park, about 15 miles from our campground. I had read online that there are actual dinosaur tracks at the park and was interested in seeing them.

Using our Texas Park Pass we did not have to pay the $7 per person entrance fee. We got a map and went exploring. The first thing you see are two huge dinosaur statues. Notice Kevin is reading one of the signs, so you can see how big these guys are. 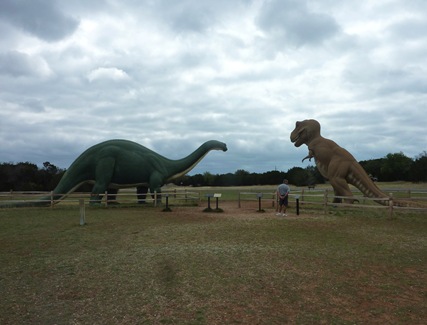 These statutes were built for the New York World’s Fair in 1964 and paid for by The Sinclair Oil Company. I’m sure many of you remember seeing the green one on gas station signs. In 1970 Sinclair donated them to this park. The guy on the left was known for many years as a Brontosaurus. It turns out that was incorrect.

In the early days of dinosaur excavating, there were two men who were fierce rivals. They would do anything to beat out the other guy. One of them uncovered the skeleton of an Apatosaurus but it didn’t have a head. He put a different dinosaur’s head on it and claimed he had discovered a new species which he named Brontosaurus. The error was accepted by the scientific community and not discovered for many years. Interesting!

The Apatosaurus was one of the largest land animals that ever lived. It was 75 feet long and weighed 33 tons and roamed Western North America.

The one on the left is the Tyrannosaurus Rex. We’ve all seen him in the movies. Neither of these dinosaurs actually lived in this part of Texas, but they make for a nice display.

We climbed down some rock stairs to the river to the first track viewing area. Honestly, if I didn’t know they were there, I would have never guessed there were dinosaur tracks beneath the surface of the water. They just look like big holes. These tracks were made by a Theropod. 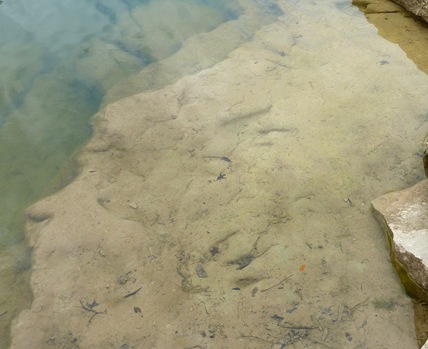 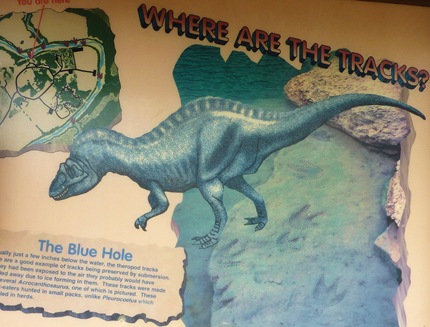 Our next stop was also another site along the river. Some tracks were in the water and some were in a roped off area of mud and dirt. 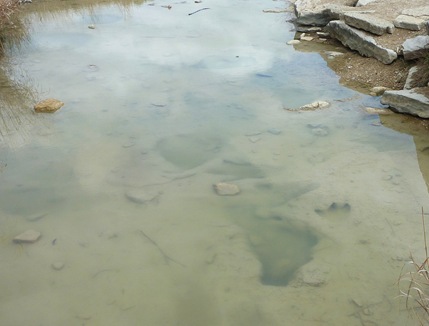 The bigger rounded tracks were made by a Pleurocoelus. I think this park would have been much better if there were more signs and markers pointing to the tracks. There are signs at the top of the riverbank, but when you get down there, you don’t really know where to look or what you are looking for.

We drove through the campground to see what it was like. The roads are quite narrow and there are lots of low trees. This is definitely not a campground for big rigs.

I saw a story on the news that the Texas legislators have taken two-thirds of money designated for the state parks to pay for other stuff. Figures. Although the state parks we have visited are nice, you can see they could use more funding. Most trails are not well marked, and grass needs to be mowed in all of them. They’re just looking a little rough around the edges.