Yesterday afternoon we walked into Port Aransas to take a look around in their little museum. We discovered that Mustang Island got its name because of the wild mustang horses that used to roam the island after being brought on Spanish ships. We also learned that Teddy Roosevelt stayed on the island at one time and went on a fishing expedition. 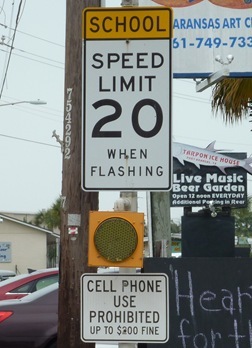 We noticed this sign. Later on we saw the same sign in another location near a school. We’re thinking the law is no cell phone use in a school zone. We’ve never seen that anywhere else.

I browsed in a couple of small shops and found a cute pair of earrings. We wandered down one of the side streets to check out a glass shop. We couldn’t figure out why there were about 50 cars parked along the side of the road.

I was chatting with the lady in the glass shop about how she makes her jewelry, and she asked me if we were going to the belt sander races next door. We didn’t know anything about it, but found out that’s why all the cars were parked on this road.

We wandered to the backyard of the small bar called The Gaff, and there were a ton of people packed in back there. The sign in front said “Welcome to the birthplace of Texas belt sander races.” 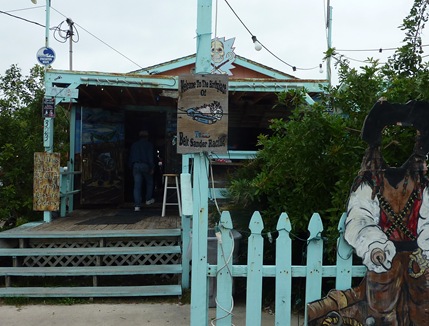 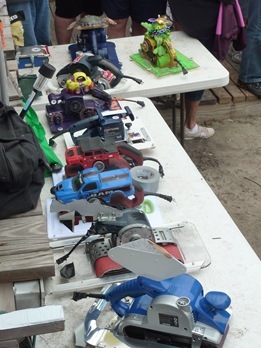 We saw two long wooden tracks and a table with a bunch of decked out belt sanders. A little after 3 pm the announcer played the national anthem and the race was underway. There were about a dozen entrants and each heat was the best out of three races. Then there was a winners division and a losers division so they would race again. This could go on for a long time.

Notice all the people (I’m guessing there were at least 200 spectators). The guy in the blue shirt was from Team Viagra. He had quite a cheering section all wearing the same shirts.

They even had starting lights and line judges in case it was close. 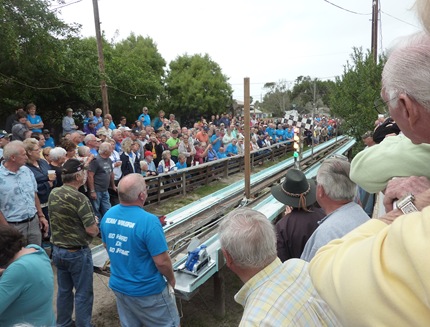 We stayed and watched a few races and then headed home. What a hoot! Everyone seemed to be having a great time with plenty of beverages being consumed. This was definitely a draw for the Winter Texans as most people in the crowd could be described as senior citizens.

What a great marketing ploy. We walked past several other bars on our way home, and there were at most a handful of people in each one. Certainly not the hundreds attending the belt sander races.

As we were leaving, I spotted this bicycle in the parking lot. The red lights were blinking. I just have to say it, this was definitely a redneck event. 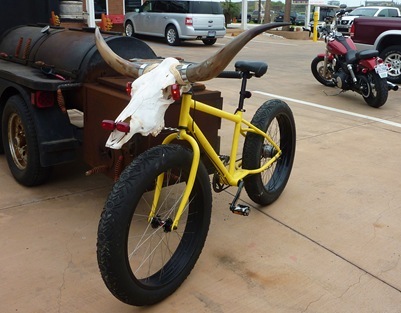