Can You Hear Me Now?

Things were very busy in the park this past weekend. All of our sites were rented and both shelters were rented for Saturday and the hut was also rented Sunday. It’s graduation party time.

With the graduation parties came some young people. Most of our clientele at this park is usually older people who enjoy peace and quiet. Saturday’s graduation party group had five sites in the park rented as well as the shelter. They brought more noise and commotion than we’re used to.

On Saturday Kevin had to deal with some teen boys who decided it would be fun to set off a firecracker in the bathroom sink. They were very apologetic and behaved after that. Luckily, no damage. I had to shoo some little kids out of the bathroom. They were filling squirt guns in the sinks and had the floor soaking wet and very slippery. I sent them to an outside water faucet. What is it with kids and bathrooms. Overall, nothing serious happened, just lots of activity. 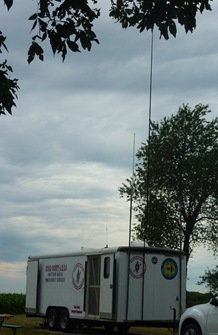 There was another group in the park with ten sites reserved. They were from the Rock River Radio Club. They come on this weekend every year to participate in an international ham radio event. They set up all kinds of antennas in the park and spend most of their time inside their units talking to other ham radio operators all over the world. One site had this trailer on it. I think they slept in it. Do you see the antennas they put up on top the trailer?

The event is to help practice in case there were some type of emergency where regular communication was not available. It made me think of some of the movies where the world has some kind of catastrophic event and ham radio is the only type of communication available.

There is a contest involved for who talks to someone the farthest away and the number of people you talk to. One of the guys told us he was able to speak to many people in Europe, but the weather in Asia was bad so he didn’t reach anyone there. He also spoke to people in every state except Alaska. 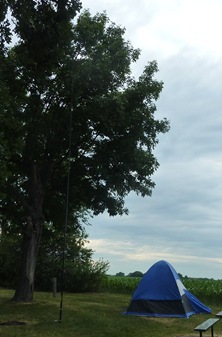 These people had a small tent but a very large antenna. It’s on the left side between the tree and the tent.

They spent a good deal of time throwing wires into the trees using fishing poles. I guess these wires boosted their signals. Some of the wires had rectangular pieces between them. If you look closely at this picture you can see the wires between the trees with the white boxes between the wires. This was then attached to a pop-up camper. (Click on the picture to enlarge and you can see it better.) 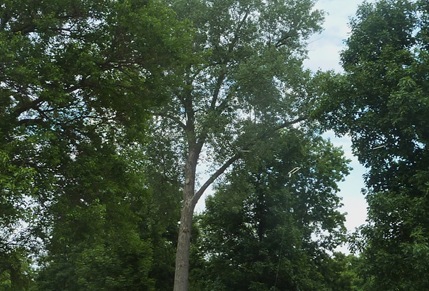 On Sunday our son Eric and my mom and her friend Richard came for a visit. It was a belated Father’s Day visit since Eric was on call last weekend. We had a nice visit together although it was a bit hot and humid out.

Eric was pretty exhausted from a long week at work due to hot weather. Unfortunately, the second half of this week is supposed to be hot and humid again with highs near 100 degrees. Eric is looking forward to fall, not winter. Winter brings the opposite problem for someone in the HVAC business.

On Friday Kevin replaced our water pump. A few weeks ago he was sitting outside and noticed some water dripping from under our fifth wheel. Upon investigation, he found that our water pump was leaking, causing our basement area to be quite wet. He rigged up a ramp made out of aluminum foil to divert the water down the ramp and into a bucket since the space under the pump was too small to place the bucket. Even though we aren’t using the pump, it was still leaking. Twice a day he would empty the bucket.

The pump is in the top right hand corner of the picture. If you look closely, you can see the discoloration on the wood near the bottom left from the water that was in the basement. 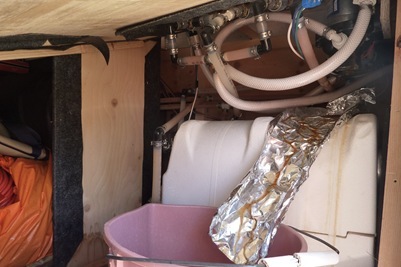 This is the second water pump that has failed on this unit. Last year in April the original pump was replaced by an RV dealer because it had stopped working. Now, just over a year later the second one was leaking. Jayco agreed to send us a replacement pump. Kevin was willing to install it so we didn’t have to unhook to go to a dealer. We sure are pleased with the service Jayco has given us. Our unit is almost four years old, and they are still standing behind their product. 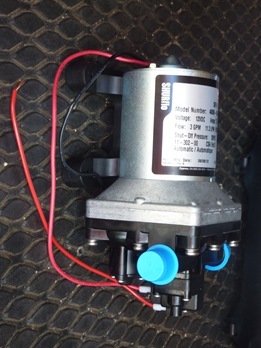 This new pump is supposed to be an upgraded model. It was tight working in the confined space, but Kevin was able to get the new pump installed. It’s working great and is much quieter. Hopefully it will last longer than a year. Kevin’s thinking about purchasing a seal repair kit that Shur-Flo sells for the leaking pump. That way we’d have a back up. Does anyone have any experience with the repair kits?

Today Kevin is off playing golf with some friends. He was planning on driving the car, but it wouldn’t start this morning. It would turn over, but wouldn’t start. He was running late so he just threw his clubs in the truck and took off. Hopefully, nothing is too seriously wrong with the car.

It’s a 2000 Grand Am with 184,000 miles on it. We only use it when we’re in Wisconsin in the summer. The rest of the year we store it at my moms. It is sure nice to have two vehicles in the summer. The car gets better gas mileage than the truck, and we don’t have to put all those extra miles on the truck.

We did one other small project on Sunday. Our storage cabinets above the big window in the back of the unit have glass inserts in the doors. The glass is frosted, but you can still see the stuff behind the glass, and I didn’t like how it looked. Two years ago I bought some frosted contact paper and put it over the back of the glass. It looked better, but you could still see some of the stuff behind it. After two years, the contact paper was starting to come off, so I needed a better idea.

Kevin suggested poster board. I bought some black poster board and cut it to fit. We secured it with some duct tape at the corners. It looks more like smoke colored glass, and you can’t see what’s inside. The two on the left have the poster board, much better. No one needs to see all my junk, I mean treasures, in those cabinets. 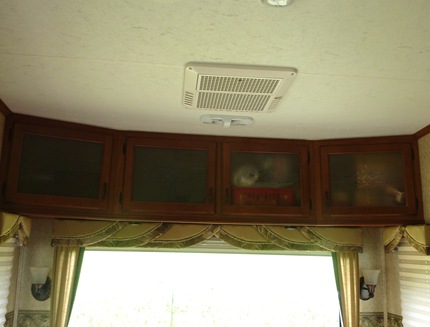